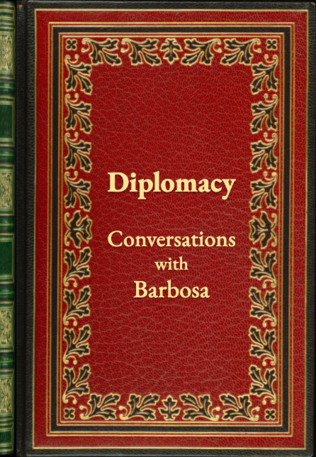 Before Diplomacy was taken up by the famous American game designer, before it became widespread, before it was ever played by post or online, this game of cunning, deceit, and grand strategy was played in the taverns and cabarets and tunnels from Paris to Saint Petersburg by commonfolk of Europe.

These are conversations on opening strategy between an aspirant and a true master of the form, one Frederico Barbosa. (Includes opening theory & 28 of the best openings.)

In the following letter I received some years back I learned of a game today known as Diplomacy:

This message finds you at a tumultuous time. The Great Powers are consolidating their positions. Units, fleets and armies, are gathering at their borders, preparing for possible armed conflict.

While I may be a lowly plebeian, I have eavesdropped on diplomats in my travels from the corners of cafes and from balconies above private courtyards. From speculation on information gathered in this fashion I have grown relatively rich. And in a world, mind you, where the future is difficult to predict!

Apologies, for I have digressed. The main point is this: Despite my status, my modest travels from the Eastern Mediterranean to the Iberian peninsula to the south of England and finally to the villages outside of Saint Petersburg have put me in a position to impart knowledge befit a rising diplomat in these critical moments of the new century.

Before I share more, I must ask something of you. I have enclosed an insert of a game I came across, which I urge you to review.

With that, I am at your service.

PS Don't forget to review the insert of the game.

This is the game I have delighted to partake in with a rather rowdy bunch at a tavern near my present location. They coaxed me to their table with the promise of a mug and the insinuation of a good time to be had. They needed a seventh player, for this game could not be played otherwise. We drew lots and were then given titles akin to the seven Great Powers of our day.

To begin the game, each person held three (or four) of the thirty-four coins (the Russian held four). The remaining twelve coins were scattered on the table's grainy, uneven, and beer-stained surface.

The ringleader went on to explain that the game was deceptively simple. All there was to do was persuade the others to let you have eighteen of the thirty-four.

Already, this was a pretty interesting game. (Who would allow one of out seven players to amass such a bounty?) But even at the start, you can imagine the mounting predicaments. How would we divide the twelve unowned coins? And, once that feat complete, how on earth would I persuade the others to give me their coins, particularly the shiny ones!

There were of course in this affair additional territorial and resource components to consider, as well as the fact that all our decisions occurred simultaneously and under the table. (My shins are now quite battered.)

I will not bore you though with the spatial relationships nor the economy, from which the constraints of positioning, logistics, and tempo came into my attention. Unlike a game of cards, no player may drunkenly hand his whole lot of coins to another by disastrously bad play, boredom, or interest in a passing lad or lass.

My counterparts were delighted that I joined in. And they were even more pleased that I seemed to understand the finer points. I need not remind you I grew up thieving in the streets and can don a remarkably good costume should I need to pass through guarded gates unnoticed.

I inquired about their little game of thirty-four coins and they assured me that although much had been discussed and even written about the game, that it was surely in its infant stages. What's more, in times of peace, how else would the generals occupy themselves?

Having secured eighteen coins, I promptly spent them on a round for the table and finally bid this crew of drunken adolescents adieu. I made for the port to catch a lift to my next destination.

So it was that I had my first introduction of the game that would become Diplomacy. What follows is what I have gleaned from conversations with dear Frederico. Any knowledge imparted here I owe to Mr. Barbosa. As such you will see me quote him regularly.

After receiving the mysterious letter, with great fortune I tracked down Frederico Barbosa. I found clues I later wondered if he intended for me to find, not unlike seeds of misinformation spread to eager ears. Was he a chef, a carpenter, a spy? Though I came to understand him best as a Portuguese poet, his identities nevertheless seemed as numerous as the cities and seas he'd traveled.

My main contribution to the pursuit he'd already begun was to assist him in clarifying the rules and preparing the game first introduced to me as 34 Coins for more widespread play. He seemed to think that putting the skill of the diplomat in the hands of the commoner would benefit society. "See what a life such skill has granted the likes of me, and from such a dire starting position!"

How could I disagree? Hence, we developed the game further, testing its merits and responding to its demerits and detractors, all the while hoping a better game designer than we would take it up and spread it more effectively to the masses.

In the years that followed I played many games of Diplomacy, though fewer than I would have liked. Even when Frederico's charming persuasion accompanied my enthusiasm in this back-alley tavern

or that underground cabaret, it was exquisitely difficult to convince strangers to play with us, times being what they were. It helped that we were able to recruit a modest bevy of gamemasters throughout Europe to conduct Diplomacy games by post, although these games tended to be reserved for the upper classes.

Diplomacy is a great game. A game of cunning, deceit, and deception, to be sure, but also one of careful planning, collaboration, and creativity. It calls on the player to at once be dangerous and delectable.

Whenever I played it called to mind the struggles the Great Powers themselves engaged in. The desire to expand their territories. To secure their borders. To ensure growth and prosperity for their people. To fix the memory of their achievements in the legends told by their followers.

While I only played with the honorable Frederico Barbosa a single time--he swiftly soloed and departed before the night was out--his presence did linger over me as I feasted upon the dawn of a spring day in the south of France, 1908. Physically, I was exhausted, mentally spent, my mind dulled by late night wine with five other defeated diplomats, and yet there was an energy moving about me. You might say it was the spirit of Mr. Barbosa, the memory of our negotiations, the charm of his diplomacy, the brilliance of his deadly backstab, to which I will later relate.

After the sun had dissolved the fog mid-morning I descended to the streets of the 5th arrondissement, where, at a street cafe I watched the passersby, sipped a refreshing coffee, and revisited each moment of the game, how I'd made my decisions, and what I might have done better. All this in a journal bestowed to me by Frederico. Besides playing as many games of Diplomacy as one can, reviewing and discussing past games was a practice Mr. Barbosa suggested was the best way to improve.