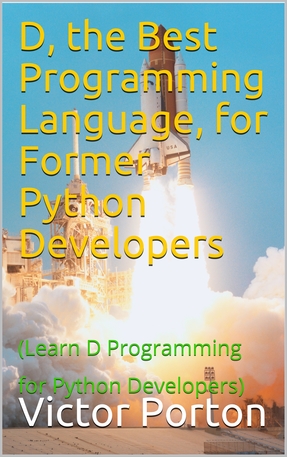 A book about D programming language or DLang for Python programmers. “There is no best programming language”, they say. There is, for most applications it is D. The book starts from a comparison of D to Python and teaches all important features of D.

The book starts from a comparison of D to Python. Then it explains D starting from simple features (types, variables, functions, expressions, statements) up to advanced ones (object oriented programming, templates, mixins, contract programming, overloading of operators, etc.) Then follows an advice for good programs and introduction to several libraries: the standard library Phobos (ranges, arrays, functional programming, tuples, the variant types, files, etc.) and several other important libraries including some libraries written by the author. Through these libraries D supports asynchronous programming, multithreaded programming, dependency injection (one particular “ideologically correct” flavor of which is introduced in details), etc. This book doesn’t just teach you D syntax, it gives you some principles to program in D in the right way. It is also considered how to create an object oriented wrapper over a C library. The book contains the articles “How to Make Your Programs Run Hundreds to Thousands Times Faster Without Giving up Reliability and Ease of Programming” and “What would be my choice of programming language if I was ordered to write a nuclear weapon control system?” D is the second choice for such kinds of projects after Rust (and no, it is not Ada). The book ends with an advice on which D compiler to use.

This book makes you a D programmer. D is a very unusually good programming language for startups, academics, programming hobbyists, open source developers, big and small companies who decided to improve their efficiency and effectivity, electronics companies, game developers, system programmers, military, industry, supercomputers and mainframes. D can be used for desktop, Web development, electronics, smartphones, servers, mathematics, robots, games, GPU and AI, and even for writing an OS. If you are a programming teacher, your service would be greatly improved by starting to teach D. If you belong to any of these categories (and probably many more), don’t miss this great opportunity to learn D! And D is fast and low electricity consuming (green).

And well, there are 3 (three) free D compilers for many platforms. Just start to use it. Who does use D? For example, Facebook, Mercedes-Benz, and Netflix. Sometimes big companies make right decisions.

Victor Porton is a free software (especially XML and blockchain) and mathematics developer (author of algebraic general topology and axiomatic theory of formulas), a writer and activist. Victor studied mathematics at Perm State University and did his first (big) scientific discovery at the first year of the study.

Chapter 1. About the author

A comparison of Python and D

Advantages and disadvantages of D

Using a class as an associative array index

`in` and `out` conditions

`in`, `out` and inheritance

The order of function execution

Chapter 28. Introduction to the Standard Library

Chapter 30. Memoizing that is caching function result in D language

std.functional.memoize from the standard library

Example of definition and combination

Chapter 34. Why I can’t call `new` from a template

About finalization and related stuff

Chapter 36. How to Make Your Programs Run Hundreds to Thousands Times Faster Without Giving up Reliability and Ease of Programming

Chapter 37. What would be my choice of programming language if I was ordered to write a nuclear weapon control system?

Chapter 38. Which compiler should I use?

Package and/or binary availability, by platform and compiler