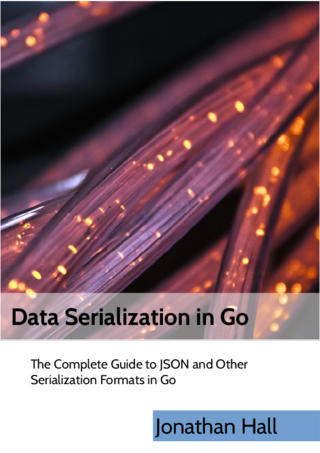 The Complete Guide to JSON and Other Serialization Formats in Go

Data serialization in Go can be a challenge for the most seasoned Go developer. For the newcomer, it's often an infuriating experience. Strict types, no generics, and a lack of object-oriented features are just some of the limitations of serialization in Go. This book breaks through the confusion, with detailed explanations, and practical examples.

Strict types, a lack of object-oriented features, and no generics are just some of the limitations that apply to data serialization in Go. Proper and efficient data serialization can be daunting even for the most experienced Go developer. For the newcomer, it's often overwhelming and infuriating.

This book grew out of several years of experience building and maintaining Kivik (https://kivik.io/), the popular CouchDB driver/SDK for Go. In working with CouchDB, which relies heavily on sophisticated manipulation of JSON documents, the author developed several novel techniques and approaches to solve common problems encountered in data serialization.

This work-in-progress book consolidates all of the author's knowledge, research, and tips and tricks on the subject, in a single place.

Hello, world! I’m Jonathan Hall, a software developer and DevOps advocate originally from the midwest United States, living in the Netherlands since 2015.

I remember the day I wrote my first line of code. I was eight years old, and the night before I had been falling asleep in the bedroom adjacent the living room where my father had his Commodore 64. I kept hearing the computer make strange beeping noises, so I got out of bed and went into the living room to inquire.

“I’m typing in some programs from the computer manual. Go to bed, and tomorrow you can take a look,” was his answer.

I had quickly finished all the programming examples, and was hungry for more. Thus began my regular visits to the public library, to borrow every book on BASIC.