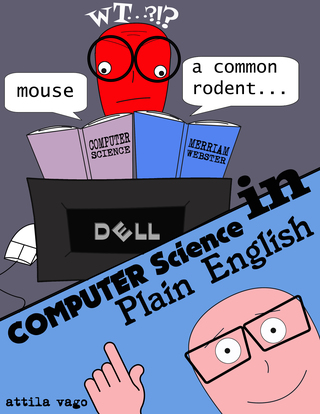 Will turn you into a power user in no-time!

Computer Science in plain English is a book I decided to write after 8 years of IT Technical Support. When it comes to Computer Science, I feel like nobody really cares about users, and few authors actually understand them. There's a general idea that users don't have to know anything about computers and computer science, while technical support guys are some sort of Gods that came to Earth to help these mere mortals when their computer suddenly stops responding. IT professionals speak in code language, while everyone else worships them. Truth is, Computer Science is not that big of a deal, and it is much less indimidating than it has to be. In 8 years I have learned a lot from users, most importantly the fact that they are literrally scared to explore the wonderful possibilites a computer holds. Discovering by accident the right-click, still makes some people cry out "Oh my God, what did I just do?" So not OK. People should be much more comfortable around these machines especially because they start becoming a constant part of our every-day lives.

This book will hopefully clear all that up, and leave you with a sense of confidence. However confidence is not enough, so this book also focuses on resources, most importantly free resources so that you and other users can stop worrying about spending thousands of dollars on software and other resources. Computer Science in plain English is not about "nerdy, and hard to read - impossible to understand" technical language. This book is about stripping down Computer Science to a generally accessible level, to plain English. A tech support guy speaking to you in your language.

This is a work in progress, however I invite you to download the book in its present state, hoping that you'll provide constructive feedback, and thus turn the book into a better or even perfect final release. By downloading you also make sure you are going to get all the updates to this book for free!