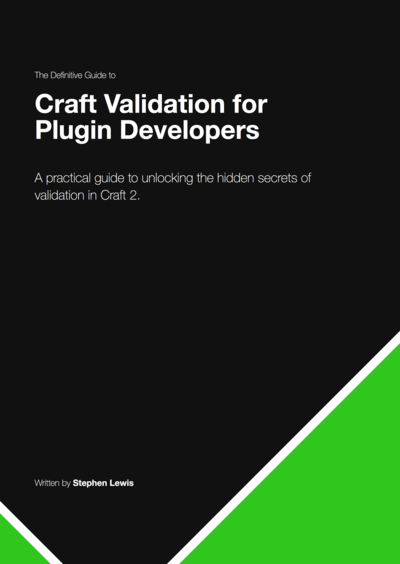 The Definitive Guide to Craft Validation for Plugin Developers

The Definitive Guide to Craft Validation for Plugin Developers

A practical guide to unlocking the hidden secrets of validation in Craft CMS.

A complete guide to validation in Craft CMS, all the way from the high-level concepts, right down to the nuts and bolts of implementation. If you want to know how to implement validation in your Craft plugin as quickly and effectively as possible, you're in the right place.

If you're working on a Craft plugin that accepts user input, chances are you'll want to validate that data. Thanks to its Yii underpinnings, Craft includes lots of powerful validation features as standard, but they're not always easy to use or understand.

In an attempt to help us out, Craft adds its own layer of abstraction on top of the Yii validation tools. This makes the syntax a bit more consistent and approachable, but also renders the associated Yii documentation useless. Worse still, the official Craft documentation is currently rather lacking in this area.

That's where this book comes in. It provides a complete guide to validation in Craft 2, all the way from the high-level concepts, right down to the nuts and bolts of implementation.

If you want to know how to implement validation in your Craft plugin as quickly and effectively as possible, you're in the right place.

Stephen Lewis is the founder, fearless leader, and general dogsbody of Experience, a web development consultancy.

Stephen began his web career back in the late 90s, when font tags were the height of sophistication, and Flash seemed like the solution rather than the problem. Long before then, he was programming in BASIC, Pascal, FORTRAN, and several other languages which have utterly failed to withstand the test of time.

Perhaps because of this history of obsolescence, Stephen has a curious affinity for PHP. It's not young or hip, isn't particularly pretty, and never gets invited to the cool parties, but somehow it gets the job done. These may be further reasons for Stephen's aforementioned feelings of empathy.

When he's not wrangling PHP, Stephen dabbles in JavaScript, and the occasional bit of Python, although he secretly doesn't trust significant whitespace. In times of weakness, Stephen has been known to turn chairs upside-down to see how they're made, a sad and disturbing legacy of his Furniture Design degree (which has been about as much use as FORTRAN).

Should you wish to peer deeply into the dark recesses of Stephen's psyche, you can find him blogging irregularly, and Tweeting too frequently.