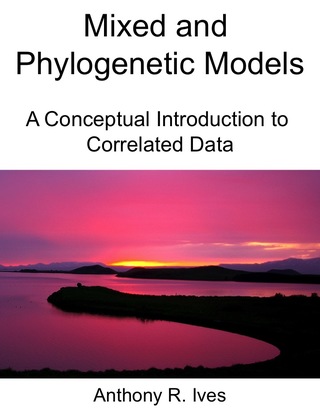 Mixed and Phylogenetic Models: A Conceptual Introduction to Correlated Data

Are you confident your statistical results are correct? To answer this, you need to know the concepts behind statistics. This book, and R code, focus on data with correlated errors that arise in mixed models and phylogenetic models. It will hopefully give you confidence to judge statistical methods and the results they produce. The book is free!

The book is integrated with R code that illustrates every point. Although it is possible to read the book without the code, or work through the code without the book, they are designed to go hand-in-hand. The R code comes with the complete downloadable package of the book on leanpub.com; if you have problems downloading it, please contact me.

I've designed the book to be read in entirety, or at least for each chapter to be read in entirety. Therefore, it is not organized like a reference manual. However, because I don't expect everybody to read the whole thing, I've tried to repeat some material between chapters, so that each chapter is more self-contained. Still, there might be places where you will want to consult another chapter, and I've included pointers to sections in other chapters where appropriate.

The material covered in the book is:

The first chapter introduces and analyzes a hierarchical dataset of ruffed grouse sampled at stations (plots) within roadway routes (sites). The relationship between the chances of observing a grouse at a station and wind speed during the observation is analyzed using nine methods including linear models (LMs), generalized linear models (GLMs), linear mixed models (LLMs), and generalized linear mixed models (GLMMs). The many methods of analyzing the same dataset begs the question of which is best.

Which method is best depends on the question and the data, and it is not always the obvious one. Chapter 2 presents the statistical tools for deciding which method is best to analyze a correlated dataset. The chapter discusses properties of statistical estimators, such as bias and precision, and the characteristics of good hypothesis tests, specifically proper type I error control and high statistical power. This is a very fast overview of mathematical statistics and then application to the grouse dataset presented in Chapter 1.

There is a close relationship between hierarchical data and phylogenetic data, and the same approaches can be used for their analyses. Chapter 3 employs the tools presented in Chapter 2 to evaluate common methods applied in phylogenetic analyses used to compare among species or other phylogenetic units. I also show the not-so-nice consequences of ignoring the possible correlation generated by phylogenetic relationships among species.

Community data have both hierarchical structure (e.g., samples taken from plots nested within sites) and phylogenetic structure (e.g., related species occurring more often in the same sites). Combining methods for analyzing hierarchical data and phylogenetic data produces Phylogenetic GLMMs (PGLMMs) that are useful in a broad class of ecological community studies. This chapter uses PGLMMs to investigate different types of questions about community structure, and assesses the properties of the models. This material is only covered very technically in the primary literature, and the R packages that can perform the analyses are just being developed. Therefore, the Chapter 4 could function as a manual for the phylogenetic community models discussed.

Although the book is titled an introduction, it is an introduction to the concepts behind the methods discussed, not so much the methods themselves. It assumes that the user knows R and the basic application of mixed and/or phylogenetic models.

I am an ecologist in the Department of Integrative Biology at the University of Wisconsin-Madison. I've spent much of my career trying to combine theoretical models and data, and this requires statistics. I have a growing fear that as the number and sophistication of statistical methods increase, and as the ease with which to perform these methods also increases, the quality of statistical analyses will decrease: researchers will become lost in a maze of methods, some of which might be good but some of which might be bad. I hope that every researcher arms themselves with a foundational knowledge of statistics so that they can determine themselves what are the best methods for analyzing their data.