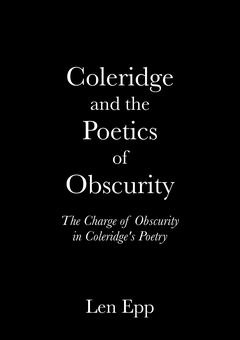 This is the fifth chapter of my DPhil thesis, Coleridge and Romantic Obscurity.

In this chapter, I consider the function of obscurity in Coleridge’s early poetry, in the reactionary defence of poetic obscurity in the Biographia Literaria, and in the construction of the ‘mystery’ poems.