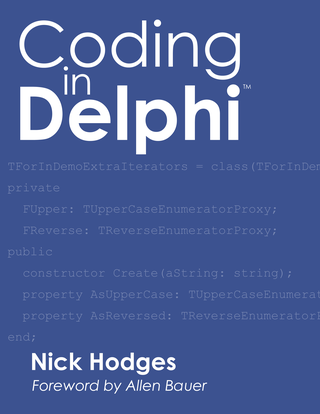 Nick Hodges
This is a book all about writing Delphi code. It's not about the VCL or database access. It's just about how to use the language in the most effective way to write clean, testable, maintainable Delphi code. It covers a variety of powerful Delphi programming features and techniques including Generics, Interfaces, Exception Handling, Anonymous Methods, Collections, RTTI, Enumerators, Attributes, Dependency Injection and Unit Testing.
$14.99
Minimum price
$14.99
Suggested price

Over the years, I've spoken in front of a lot of Delphi developers. The one thing that I notice is that there are a lot more of you Delphi guys than the average Delphi guy thinks. There are Delphi folks everywhere.  Also, I have noticed that a lot of Delphi developers are "behind". That is, they are either using an older version of Delphi, or they aren't using or aren't even aware of all the features in the newer versions of Delphi that they are using. Something I like to do when I'm in front of folks is ask a few questions about what people are doing. I'm always saddened that the response to questions like "Who is doing unit testing?" or "Who is taking advantage of Generics?" is pretty meager.

This is particularly true for the language features and the run-time library. It's quite easy to move forward with an older code base, utilizing the new features in the IDE and adding new things to your app using the new high level frameworks and components that come in the newer versions. For example, you might have been developing an application since Delphi 3, moving forward through various versions. Along the way, you may have added some DataSnap functionality, started using the Code Insight features in the IDE, and when you moved to XE2, you start poking around with FireMonkey.

But it's fairly easy to ignore the new language features that come along with those new versions. For instance, two powerful language features were added in Delphi 2009: generics and anonymous methods. Both are features that enable the development of really cool code and frameworks. But if you didn't understand or feel the need for them, then it was pretty easy to simply not use them. You can still do all kinds of great stuff in Delphi without them, but with them, well, you can write some really beautiful, testable, and amazing code.

For instance, a relatively new framework that exists only because of these new language features is the Spring Framework for Delphi, or Spring4D, as I'll refer to it in this book.  Spring4D is a feature rich framework that provides a number of interesting services, including a wide variety of collections that leverage generics, an Inversion of Control container, encryption support, and much more.  I view Spring4Dsolid as much a part of the Delphi RTL as SysUtils is.  Using Spring4D in your code will make many, many things easier and cleaner. But many Delphi developers don't know this yet.

If the above is familiar, this book is for you: The Delphi developer that hasn't quite yet made the leap over into the cool and amazing things that you can do with the latest versions of the Delphi language. This book is all about introducing these new language features and some of the intriguing things you can do with them. It will take a look at these new language features, and then expand into some of the open source frameworks that have sprung up (no pun intended) as a result. It will then show you techniques that you can use to write [SOLID](http://butunclebob.com/ArticleS.UncleBob.PrinciplesOfOod), clean, testable code.

You won't find much of anything about the IDE or the higher level frameworks here. Screen shots will be few but code examples many. You won't find anything about how to build better user interfaces or fancy components. What you will find are ways to make your code much cleaner, much more powerful, and way easier to maintain.

This book is all about the cool, new code you can write with Delphi.  It won't matter whether you are building a VCL or an FM application.   I've titled it "Coding in Delphi" because I want to make it a book that shows you simple examples of how to use powerful features -- that, is about the *code*. These language features are indeed advanced features -- they are new relative to, say, the `case` statement -- and thus many of you are beginners to them. By the end of this book, you won't be.

The approach I'm taking for this book is to try to distill things down to the very basics.  The examples will be very simple but the explanations deeper.  I believe that if you can understand the basic idea in a simple example, it is but a small leap to using those ideas in more complex code.  There is no point in giving complex examples when you can get the main thrust using fundamental implementations that illustrate advanced ideas.  Between the code in this book and in the samples online ([https://bitbucket.org/NickHodges/codingindelphi](https://bitbucket.org/NickHodges/codingindelphi)) you can learn all the precepts and then begin applying them to your own code.  In other words, nothing fancy here, just the basics -- it is then up to you to use these ideas in your own code.

This book is not done -- it's instead a living document.  Since it is self-published on a platform that makes iteration very easy, I plan on having frequent releases to fix typos (which will, I'm sure, sneak through despite my best efforts), improve examples and descriptions, and keep up with technology changes.  Owners of the PDF should get notifications of new versions automatically.  If you are reading a paper version of this book, I'm sorry I can't deliver fixes to your hard-copy -- perhaps some day that will be possible.

The book will be done when you guys say it is done.  Maybe, it will never be done because Delphi keeps growing and expanding.  I guess we'll see.

As a result, I'm totally open to feedback -- please feel free to contact me at nickhodges@gmail.com with suggestions corrections, and improvements.  Please join [the Google Plus group for the book.](https://plus.google.com/communities/110978417023349293804)    I may even add whole new chapters.

Thanks for  your purchase -- this book was a labor of love, so every sale is icing on the cake.

Nick Hodges is a Software Development Manager at Gateway Ticketing Systems. He has been a part of the Delphi community from the very beginning. He is an original Delphi 1 beta tester, a former member of TeamB, an Advisory Board member for the annual Borland Conference, a frequent conference speaker, a blogger, and author of numerous articles on a wide range of Delphi topics.

Nick has a BA in Classical Languages from Carleton College and an MS in Information Technology Management from the Naval Postgraduate School. In his career he has been a busboy, a cook, a caddie, a telemarketer (for which he apologizes), an Office Manager, a high school teacher, a Naval Intelligence officer, a software developer, a product manager, and a software development manager. Also, he is a former Delphi Product Manager and Delphi R&D Team Manager. He's a passionate Minnesota sports fan -- especially the Timberwolves -- as he grew up and went to college in the Land of 10,000 Lakes. He currently lives in Gilbertsville, PA.