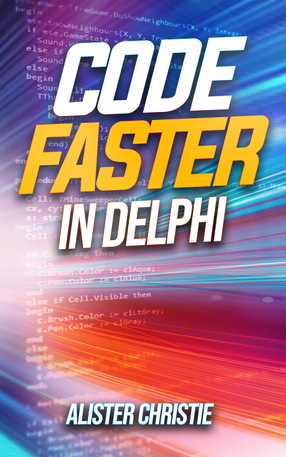 This book will make you a faster Delphi developer, it doesn't matter if you are just starting out, or have been using Delphi since version 1, you will find all sorts of tips, tricks and hacks to boost your productivity.

Don’t touch that mouse!  Hands on the keyboard, and eyes front. You’re about to embark on a Bootcamp to tone your coding muscles, sharpen your shortcuts, fix forms faster, and accelerate your career as a Delphi Programmer.

Now drop and give me twenty lines of code and five laps of that while loop.

This book will help you Code Faster in Delphi through a vast array of tips, tricks and hacks to squeeze every bit of productivity out of yourself and the Delphi IDE.

Some ways your coding will be made easier:

By enhancing the IDE with plugins.

You’ll be introduced to powerful language features such as:

Get started with some of the best parts of the Run-Time Library, including:

Use Meta-Programming to write and modify code to save you from horribly repetitive tasks.

Improve your physical environment with easy solutions to hardware and station problems.

And of course, once you’ve mastered these, where to go to get even faster and better.

With over one hundred areas of improvement covered, this holistic approach to Coding Faster In Delphi will boost your productivity, and therefore your value to your clients, bosses, and colleagues.

Alister Christie has been programming in Delphi since 1999, building and maintaining applications for the real estate, banking, racing, and legal industries here in New Zealand. In these roles, he has also used other technologies such a C#, Ruby on Rails, Android/Java, but Delphi is his preferred environment.

Alister loves to teach, and has also held training seminars on coding for his teammates, user training for clients, as well as producing the content found here. Most of his free videos also appear on YouTube, as at January 2020 have over 1.58 million views and around seven thousand subscribers.

Alister has presented at numerous online CodeRage conferences. These conferences last for an entire week with thousands of participants. The replays for all his presentations are available on this site.

Alister has been an international guest speaker at ADUG (Australasian Delphi Users Group) Symposia since his debut in 2013. Alister is honoured to be invited back to present again and again.

In 2012 Embarcadero invited Alister to join a select group of Delphi experts from around the world to form the Embarcadero MVP program for which he was the first from New Zealand.

Alister holds a degree in Mathematics and Computer Science from Victoria University, Wellington. He lives near Wellington, New Zealand.

When Alister isn’t doing all that, he’s investigating new technologies, hanging out with his family, playing guitar, investing in real estate, working out, farming his lifestyle block (hobby-farm), renovating, and running a B’n’B.

Excerpt from a book review

To be honest, I purchased the book simply because I purchase just about every new Delphi book that ever hits the market. I didn't think I would get much out of this particular book as I assumed that it was targeted mainly at Delphi noobs. I was wrong. It's a nice reference that most anyone can rely on to improve their skills. I'm glad that I purchased this book and I look forward to Alister's next book. http://ideasawakened.com/post/new-book-available-code-faster-in-delphi-by-alister-christie

This book is extremely well thought out, and focuses on many aspects of how you may code faster in Delphi. Did I say many? Everything related to boosting your productivity is covered! Full review: https://delphiworlds.com/2020/09/book-review-coding-faster-in-delphi/