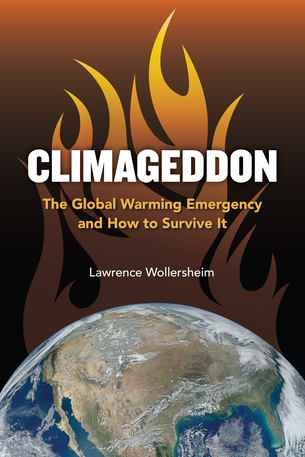 The Global Warming Emergency & How To Survive It

Global warming is worse than we've been told. If we can prevent it from becoming irreversible, we can survive. Using the Job One for Humanity Plan, we can end global warming before it is too late. CLIMAGEDDON is the must-read new book for early warning signals critical to preserving your safety, assets, and business.

Our climate scientists and governments have grossly miscalculated current global warming risk levels, consequences, and timetables. The new research and meta-systemic analysis presented in Climageddon proves global warming may already be irreversible, or will be within the next 6 to 10 years.

Climageddon’s 450 pages of original analysis presents survival-critical information you will not find in any other global warming book. It presents detailed consequence timetables, the background on how our current global warming predictions have been so grossly miscalculated, as well as the eleven critical global warming tipping points that will signal the rapid end of humanity and civilization. The science found in Climageddon clearly illustrates that if something extreme does not happen immediately to correct our current ineffective actions, 80-90% of humanity will suffer and die within the next 30-50 years.

The debate on who is responsible or if global warming real no longer matters. Irreversible global warming is here (or soon will be) for the next hundreds to thousands of years. Do not get caught unprepared. Read Climageddon soon.

Lawrence is currently the executive director of Job One for Humanity, a nonprofit organization dedicated to advocating for effective action and collaboration to end the global warming emergency. He has 30 years of experience in the trenches as a proven and successful activist and analyst.

He has written the following books:

How to Discover Your True Goals, 1985

He has also authored online mini-books and many articles on:

The Job One For Humanity Plan to End Global Warming, 2014

Wollersheim also serves as an executive at several other social benefit organizations:

His victories in a series of five highly publicized lawsuits against the controversial Scientology sect established among other things, important legal precedents on the preeminence of freedom of thought and informed consent with regard to religious practice in claimed religious settings. The Wollersheim Scientology litigation and these legal precedents are now part of first-year Constitutional law studies at many U.S. law schools.

Wollersheim also won a $500,000 award in a California SLAPP lawsuit (Strategic Lawsuits Against Public Participation, against Scientology for its use of excessive litigation tactics to financially overwhelm, harass, and bankrupt its opposition.

Wollersheim has written extensively about his 10-year experience inside Scientology, as well as scores of articles aimed at helping former members leave Scientology and get their lives back. To date, he has been the only individual over Scientology’s 70-year history to successfully sue, win and collect a full judgement.

Wollersheim was also a founder of HealthKeeper, Inc., a software company specializing in assisting dieters, diabetics, and individuals with cardiovascular problems related to weight and nutrition.

Wollersheim attended Marquette University and the University of Wisconsin Madison. Over a period of 20 years, he was also personally mentored by and became a protégé of Dr. Margaret Singer, Professor Emeritus at UC Berkeley (who was the world's most recognized authority on mind control and cults.) Dr. Singer also helped launch FactNet.

He credits his interactions with and studies of the dialectical meta-systemic analysis processes and advances of Professor Otto Laske as instrumental in helping him to create the multiple problem and solution perspectives presented in the new book Climageddon.

Wollersheim is a polymath and autodidact who is also dyslexic, which he gratefully credits with helping him keep a sense of humor and humility in his personal life and his ongoing social advocacy work.

By putting global warming into the biggest possible perspective, he is both theoretically sound, empirically up to date, and pragmatically realistic. This book should become a must-read for every intelligent and informed person, as well as a foundation of literature about citizenship. It should also help to combat fake news and the denial of the significance of scientific research."

“If we ignore the issue of climate change, humanity faces certain peril, and the five billion year evolutionary experiment on this planet comes to a catastrophic turn, if not an end. This well researched book moves beyond politics to sound science, and even proposed solutions. Climageddon may be the most important book of our time. Everyone needs to be informed about this.”

Executive Director, Association for the Tree of Life, http://www.tree-of-life.works/

"Just as global warming has become the great disruptor of the 21st-century, Climageddon will be the great disruptor of much of what we believe about global warming and much of what we are failing to do....There is little doubt that word-of-mouth will make this book a must-have, must-read for those interested in global warming issues and education. It will also become a must-read for individuals and businesses that will be severely impacted by the rapidly unfolding Climageddon Scenario..."

"If Rachel Carson's Silent Spring sounded a clarion call to the harmful effects of indiscriminate use of pesticides, Lawrence Wollersheim's Climageddon sounds a far more urgent wake-up call to the global climate warming crisis precariously close to the tipping point. Although the situation is indeed direly urgent, he assures us it's not totally hopeless. Climageddon comes not a minute too soon to arouse that necessary will into timely action."

Author of: How Whole Brain Thinking Can Save the Future

“In Climageddon Lawrence Wollersheim presents a valuable discussion of the threats posed by global warming should we fail to immediately mobilize our global resources to manage and control its rapidly escalating consequences. Climageddon not only highlights the urgency of our task, but also discusses a range of options to help reduce our risk.”

"CLIMAGEDDON could not have come at a more critical time in the climate debate. With several US protection agencies at risk of losing funding, tensions rising on the political stage, and continued denial of the effects of rising temperatures, the public needs to know now more than ever what is ahead of us, and Wollersheim proves himself up to the task.A must-buy for anyone questioning global warming and what can be done about it."

"On any planet on which sentient life emerges and forms an industrialised civilisation, its survival will be threatened by something like global warming. A key step in surviving will be the emergence of a book that clearly identifies the problem and sets out what they must do to overcome the problem. On this planet at this time, Climageddon is that book."

“This thoroughly researched call-to-arms pulls no punches as it lucidly argues that the destabilizing impacts of climate change are far greater and much closer than we have been led to believe. Likely scenarios are painstakingly laid out and they only go from bad to worse. “Which do you prefer,” writes Wollersheim, “partial economic collapse now, or total economic collapse later, with the bonus collapse of civilization?”

“Climagedden, a book well written and concise when it comes to scientific facts about Global Warming. The information found in this book is a real eye opener for people who are unaware of the dangers and consequences we will all be facing in the near future due to our continued use of fossil fuel. The viable solutions in the latter chapters are well thought out and very doable.”

Author of: One World Democracy and Healing a Broken World

"Wollersheim’s mastery of meta-systemic analysis and his firm grasp of the crucial issue of tipping points makes his book a must-read for anyone who has the courage to face facts about climate change. His contribution to the climate debate cannot be overstated."

“This book is different from all other books because its author, Lawrence Wollersheim, has amassed the courage to look all aspects of Anthropomorphic Climate Change right in the eye, and systematically, fearlessly, pin them to his collector’s boards in a frighteningly harmonious and completely understandable pattern. The result is the most honest, realistic, complete, integrated, and solution-centered summary work yet...on human-caused climate disruption.

“Lawrence Wollersheim has clearly done the kind of in-depth research needed for such a complex and huge issue as climate change, and is willing to go beyond almost anyone else in presenting the hard realities that we must face and choices we must act on at this crucial juncture in history. For those of us courageous enough to take the red pill and get informed with what is really going on and the options we still have at this late date, this book is a must-read.”

"This book should be read by every government official, every schoolteacher, and every citizen. There is no crisis more urgent than our impending climate crisis. Yet the world remains in denial. The EPA strikes climate evidence from its website. The administration turns its back on hard won regulations and clean energy bills. We must understand what is coming, the complexity of it, the future scenarios, dangers, and what we can do NOW to at least address and possibly mitigate the worst of it."

"2017 is the year that humanity must begin to understand that Scope, Scale, and Urgency or abandon our best hope to continue to expect a viable future on a (relatively) healthy Mother Earth. Then, immediately, we must respond. Or else. Climageddon is the tool for both understanding and response. This book should become a must-read for every intelligent and informed person."

Understanding the Global Warming Emergency and the Climageddon Scenario

Chapter 1 - An Overview of Climageddon

Chapter 2 - How Global Warming Works and Affects Our Climate

Chapter 8 - Dilemmas, Shockers and Our Last Battle Line for Survival

Chapter 9 - What You Can Do About the Global Warming Emergency

Chapter 1 - The Job One Humanity Plan to End Global Warming

Appendix 2 - A Spiritual Take on Climageddon