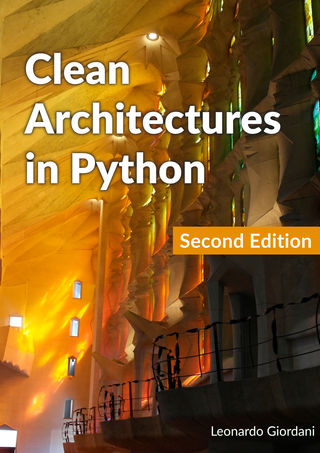 What is a good software architecture? Why should we bother structuring the code and spending time testing it? If you like spending hours debugging your programs or staying late at the office to recover from a buggy deploy in production this book is definitely NOT for you!

The clean architecture is the opposite of spaghetti code, where everything is interlaced and there are no single elements that can be easily detached from the rest and replaced without the whole system collapsing. The main point of the clean architecture is to make clear "what is where and why", and this should be your first concern while you design and implement a software system, whatever architecture or development methodology you want to follow.

To fully appreciate the book you need to know Python and be familiar with TDD, in particular with unit testing and mocks. Please refer to the series TDD in Python with pytest published on my blog if you need to refresh your knowledge about these topics.

After the two introductory parts that you are reading, chapter 1 goes through a 10,000 feet overview of a system designed with a clean architecture, while chapter 2 briefly discusses the components and the ideas behind this software architecture. Chapter 3 runs through a concrete example of clean architecture and chapter 4 expands the example adding a web application on top of it. Chapter 5 discusses error management and improvements to the Python code developed in the previous chapters. Chapters 6 and 7 show how to plug different database systems to the web service created previously, and chapter 8 wraps up the example showing how to run the application with a production-ready configuration.

You can read the book online at The Digital Cat Books.

My name is Leonardo Giordani, I was born in 1977 with Star Wars, bash, Apple ][, BSD, Dire Straits, The Silmarillion. I'm interested in operating systems and computer languages, photography, fantasy and science fiction, video and board games, guitar playing, and (too) many other things.

I studied and used several programming languages, from the Z80 and x86 Assembly to Python and Scala. I love mathematics and cryptography. I'm mainly interested in open source software, and I like both the theoretical and practical aspects of computer science.

For 13 years I was a C/Python programmer and DevOps for a satellite imagery company. and I am currently infrastructure engineer at WeGotPOP, a UK company based in London and New York that creates innovative software for film productions.

In 2013 I started publishing some technical thoughts on my blog, The Digital Cat. In 2018 I published my first book with Leanpub, “Clean Architectures in Python”, which has been already downloaded more than 25,000 times.

An Interview with Leonardo Giordani