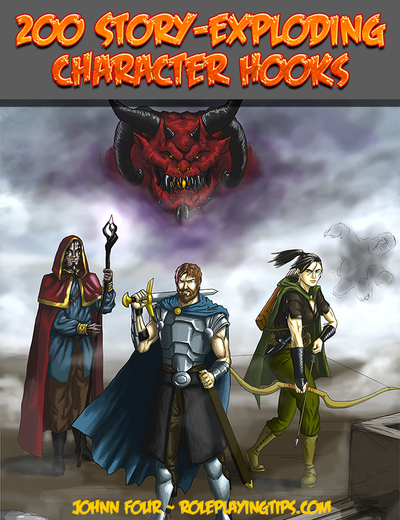 Johnn Four
If I get one more player who gives me an orphan character with no connections to the campaign I’m going to scream. Then I’m going to rip up his character sheet. LOL. This book solves the problem. 200 character hooks guaranteed to infuse plot, mystery and good gaming into cardboard PCs.
Table of Contents

What’s with players afraid to give their characters great plot hooks? Are they trying to provoke us GMs?

This book was born out of a frustration with those dumb orphan-hermit-sad PCs with no great hook to offer the campaign. Rather than put the entire weight of the plot on my shoulders, I give some back by assigning or rolling for a character hook out of this book.

Instead, they’re grist for our plot mills to help integrate characters into our campaigns and give us a morsel to work with. They’re juicy situations or motivations to get players invested quickly into the games we’re trying to run.

Fighter: Each of his three brothers was killed in duels. And the victors were all from that same family of bastards. It's time to get out in the world and learn a few things so he can come back and avenge is kin.

Cleric: Once a squire for a proud paladin, he lost his master when an evil knight challenged the paladin to a duel to the death. The knight brought cursed magic to the fight and won handily. Sneering, the knight let the cowering squire live so he could spread the tale. The worst thing is, the character caused the duel in the first place. Poorly suited to a warrior’s ways, he’s now turned to divine methods for exacting his revenge.

Rogue: He had a truly horrifying childhood tending an orchard of blood oranges for his vampire lord. But it was not always terrible. He often played stealth games, trying to sneak past the supernatural senses of his guardian. Three nights ago his lord told him he was going away, perhaps for a long time, and to keep the orchard safe. Then disaster struck—villagers attacked the orchard this morning, burning it to the ground, and he barely escaped alive. Homeless, without his lord, and armed with just his skills and wits, what should he do next?

These hooks always work. You might need to tweak an angle or detail, but when done, the player now has something to hang their sword belt on. And they love it.

Even if they don’t thank you for fleshing their cardboard PC out a bit, you’ll see it come through in the game. Like a grain of sand in a clam that turns into a pearl, their PC with a character hook will take on a cool identity, and the player will want to do something more than just break down the door and steal stuff.

Same goes with your NPCs. Ever create one that feels boring? Give them one of these hooks and feast upon the inspiration. Let your NPC run with the hook and see where it leads.

Johnn Four is a veteran RPG author who specializes in helping game masters and their players have more fun at every game.

With credits ranging from the DMG II to self-published award winning-books on GMing, his proudest achievement is the Roleplaying Tips newsletter.

Now almost 600 issues and still going, you can subscribe to get free GMing tips from Johnn and all the GMs around the world who submit tips for sharing to subscribers.

Get your free GM tips here.