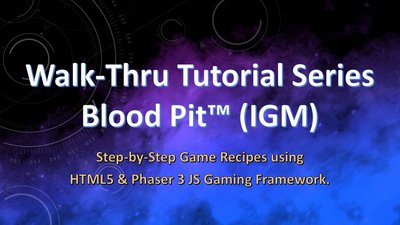 The instructor has published 100% of this course.

Quickly learn how to create the Blood Pit In-Game Mod (IGM). This course is tailored using a Step-by-Step Game Recipe for Workshop attendees and Instructors using either Phaser v3.16+ or v2.x.x. Learn how to build this RPG Quest and methods as Progressive Web Applications or Single Page Web Applications.

Discover how to create RPG games using the Step-by-Step Game Recipe methods in this course. This is a "Mega" construction course; you'll learn two different online games deliveries using these RPG game mechanics. When you're finished, you will have a production pipeline to create as many different RPG games as your imagination can dream of!

You'll also get bonus content, download examples, and source code references on how to do every single thing in this game design workbook, so you can copy and paste any examples into your own productions and then modify those resources for your own purposes.

I would like to guide you in creating several modes of RPG game mechanics. We will use these game mechanics, mechanisms and the development methods discussed in Phaser Game Prototypes. By the end of this tutorial, you should have a fully functional RPG game and two different delivery modes (Phaser v2.x.x and Phaser III) game styles using your own gaming assets. There is a supporting website where you can download the bonus content included with your course purchase.

This extraordinarily comprehensive course will teach you how to:

If you have any feedback or suggestions please join our email listing or participate in the forum for this course!