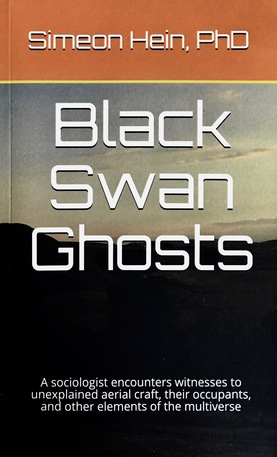 A sociologist encounters witnesses to unexplained aerial craft, their occupants, and other elements of the multiverse

This book is 99% complete

People worldwide have encountered Unexplained Aerial Craft, strange beings, and other phenomena for many decades. And yet, our governments and mainstream media refuse to talk about it. What does it all mean, and why is our society so afraid of this subject? Contains new, never-heard-before pilot and witness accounts!

What happens when you come into contact with a controversial topic that it can destroy your career?

People worldwide have been having contact and sightings of unexplained craft for decades. I didn't have much experience of this phenomenon until 1996, when I became involved with Remote Viewing, the ability of ordinary people to accurately describe non-local people, places, and events without using their physical senses. These protocols were the outcome of a highly classified government program that was made public in 1995.

Little did I know at the time that I would come in contact with witnesses of unidentified vehicles and other hard-to-understand phenomena. Black Swan Ghosts is a follow-up to my first book, Opening Minds: a journey of extraordinary encounters, crop circles, and resonance, and examines why we as a society are so reluctant to talk about this fascinating and strange subject area.

Includes testimony and stories from first-hand witnesses to UAP phenomena, including a former Aerospace engineer, remote viewer for the government's classified Stargate program, a retired NASA scientist, a retired Air Force pilot, and many more! Purchasers of this ebook will get "special access" to member's-only content, including exclusive, never-before-seen interviews with some of the witnesses in the book.

It’s Dr. Simeon Hein here and I want to thank you for visiting my book age. I thought you would be curious to know something about me. I’ve taught statistics to university undergrads and have a Ph. D. in sociology with an emphasis on how we humans interact with technology. I started my own research and teaching company, the Mount Baldy Institute in 1996, to give people the opportunity to learn resonant viewing, a type of intuitive training that taps into our creative unconscious intelligence.

I also study crop circles and take people on crop circle tours. You can watch some of my lectures about crop circles. Download some of my research papers for free. I also play guitar and write music: You can listen to and download my music here. I’ve written other books including Opening Minds: A Journey of Extraordinary Encounters, Crop Circles, and Resonance, and more recently, Planetary Intelligence: 101 Easy Steps to Energy, Well Being, and Natural Insight.

I read your book in one sitting last night, I couldn't stop it was so good. I love it!!! Your book is riveting. Not only does it discuss valid proof of the UFO or UAV phenomenon but how the systematic denial of such proof is eroding our individual psyches and social values. You ask the important questions and discuss the implications of our collective denial of the truth. Thank you.

I couldn't put it down. Excellent material.