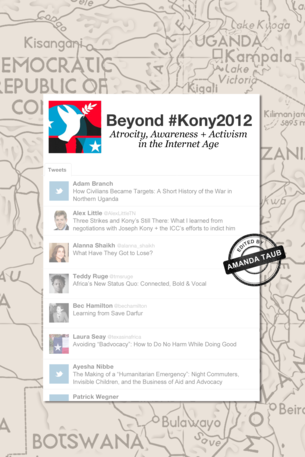 This book is for those who know a little about Joseph Kony and the Lord’s Resistance Army, and want to know more. Invisible Children’s Kony 2012 has become the most viral video ever. Concerned citizens around the world, from middle school students to celebrities like Oprah and Justin Bieber, watched the film and shared it with their friends. It has now been viewed more than 87 million times. That success was soon met by a critical backlash. Critics nearly as varied as the campaign’s supporters pointed out that Invisible Children was offering an oversimplified, even misleading narrative. They faulted the campaign for failing to provide a context for the LRA conflict, and pointed out that the video portrayed Africans as either helpless victims, or heartless killers. This book is both a collection of that criticism, and a constructive response to it. The authors each wrote a short essay offering information that they felt was missing from the video, or explaining how they thought the campaign could be improved. The first several chapters provide historical and political context. Adam Branch, Daniel Kalinaki, and Ayesha Nibbe explain the roots of the conflict, and how it has persisted for so many years. Alex Little and Patrick Wegner discuss various attempts to end the conflict through peace negotiations, ICC arrest warrants, and military operations, and why they have not been successful. Later chapters consider the ethics and effectiveness of awareness campaigns like Kony 2012. Glenna Gordon and Jina Moore draw on their experiences as journalists to critique the video’s portrayal of Africa and the people who live there. Rebecca Hamilton, Laura Seay, Kate Cronin-Furman, and Amanda Taub examine the weakness of “awareness” advocacy. Alanna Shaikh explains the ethical dangers of bad aid work. Teddy Ruge offers a different view of Africa, as a place of dynamic innovation instead of violence and helplessness. And youth activist Sam Menefee-Libey describes his frustration with the tone and substance of the campaign meant to target his generation.

The Power of Images: Who Gets Made Visible?

Glenna Gordon is a freelance documentary photographer who splits her time between West Africa and New York. In addition to her own projects, she also covers news and features, does work for NGOs, and trains journalists and photographers in Africa. Her work has been published in Time, Newsweek, The New York Times, and Foreign Policy. Her work from Sierra Leone was accepted into the curated exhibitions at the 2011 LagosPhoto Festival in Nigeria and the PowerHouse gallery in New York. Other projects have been shown in Washington DC at the Corcoran Gallery as part of Fotoweek DC, where she received second place in the photojournalism and social documentary category, and in a group show about cities in Los Angeles, California, sponsored by the International Photography Awards. Gordon has also been a grant recipient of the Pulitzer Center for Crisis Reporting for a project on justice in post-war Liberia.
Laura Seay

Avoiding “Badvocacy”: How to Do No Harm While Doing Good

Laura Seay is an assistant professor of political science at Morehouse College in Atlanta, Georgia, where she teaches courses on African politics, conflict, and international affairs. her primary research interest is in the ways that communities respond to state weakness in sub-Saharan Africa. She blogs at Texas in Africa.
Sam Menefee-Libey

Beyond Kony 2012 – Reasserting the Transformative Power of Youth Activism

Sam Menefee-Libey is a youth organizer who focuses on supporting campus activists. He has experience working on a broad spectrum of economic and social justice issues, including anti-oppression, education and environmental justice.
Kate Cronin-Furman

Kate Cronin-Furman is a human rights lawyer who is pursuing a PhD in Political Science at Columbia University. She blogs at www.wrongingrights.com.
Amanda Taub

Amanda Taub is a lawyer who teaches international law and human rights at Fordham University. She blogs at www.wrongingrights.com.
Adam Branch

How Civilians Became Targets: A Short History of the War in Northern Uganda

Adam Branch is a Senior Research Fellow at Makerere University in Kampala, Uganda. His research focuses on questions of political violence and intervention in Africa, with a focus on the "Responsibility to Protect" doctrine and on the International Criminal Court. He has also worked extensively with Human Rights Focus, a grassroots human rights organization based in Gulu, northern Uganda.
Alex Little

Three Strikes and Kony’s Still There: What I Learned from Negotiations with Joseph Kony and the International Criminal Court’s Efforts to Indict Him

Alex Little is a Fellow of the Truman National Security Project and currently serves as an Assistant U.S. Attorney in Nashville, Tennessee. Previously, he worked as a law clerk and consultant to the Prosecutor of the International Criminal Court and, prior to that, as an analyst at the Central Intelligence Agency. Alex’s international experience includes time as an associate in the Conflict Resolution Program of The Carter Center, where he worked directly with former President Jimmy Carter on peace efforts in Sudan and Uganda.
Ayesha Nibbe

The Making of a “Humanitarian Emergency”: Night Commuters, Invisible Children, and the Business of Aid and Advocacy

Dr. Nibbe is a professor at Hawaii Pacific University. Her research focuses generally on questions about poverty and hunger and how the “West” engages in a relationship with the “Third World” via development and humanitarianism. She is currently working on a book about the socio-political effects of humanitarian aid in the context of the conflict in northern Uganda. To conduct research for the book, she lived in northern Uganda for over two years in both Gulu town and Opit internal displacement (IDP) camp – starting when the war was in full-swing and ending in Peace Talks.
Daniel Kalinaki

Kony2012: Treat the Political Causes of the LRA, Not Just Its Violent Symptoms

Daniel Kalinaki is a Ugandan investigative journalist who is noted for his coverage of corruption in the Ugandan government and army. Currently the Managing Editor at the Daily Monitor, Daniel is co-author of Open Secret, a book about the HIV/AIDS epidemic in Uganda. His work has appeared in the New Internationalist, Africa Confidential, and on the BBC World Service Radio, among others. Kalinaki holds degrees in Journalism from Makerere University and the City University of London.
Rebecca Hamilton

Learning From Save Darfur

Rebecca Hamilton is the author of Fighting for Darfur, a multi-year investigation into the impact of the Save Darfur campaign. A Pulitzer Center grantee, she was formerly the special correspondent in Sudan for the Washington Post. As a lawyer she spent two years working at the International Criminal Court.
Alanna Shaikh

What Have They Got to Lose?

Alanna Shaikh is a global health specialist who has been working in international development for nearly a decade. A former TED fellow, she is the author of *What's Killing Us: A Practical Guide to Understanding Our Biggest Global Health Problems*. She blogs at Blood and Milk and UN Dispatch.
Jina Moore

Jina Moore is an independent multimedia journalist who covers human rights, conflict and aftermath, and Africa. She is a 2009 Ochberg Fellow of the Dart Center for Journalism and Trauma. Her collected work and blog are available at www.jinamoore.com.
Teddy Ruge

TMS “Teddy” Ruge cofounded Project Diaspora, an online platform for mobilizing, engaging and motivating members of Africa Diaspora to engage in matters important to the continent’s development. A technology enthusiast, Ruge writes and speaks extensively on Africa’s current renaissance driven by technology, youth and the Diaspora. He is a frequent contributor to several online publications including CNN, New York Times, PopTech, The Globe and Mail, and The Guardian. In January 2012, he was awarded a ‘Champion of Change’ award by the White House for his community development work in East Africa. His work includes serving as a founding board member of Hive Colab in Kampala, Uganda -- a co-working space for young digital entrepreneurs working on web applications in Uganda. As an active social entrepreneur, he is a director and shareholder in Uganda Medicinal Plants Growers, ltd., an agricultural start up dedicated to the value-added export of indigenous medicinal crops. Ruge is also the host of The Digital Continent Podcast, an interview podcast featuring the key innovators and entrepreneurs whose work is shaping the digital economies of Africa. He was born in Masindi, Uganda and grew up in Uganda, Kenya and the United States.
Patrick Wegner

Can a military intervention stop the Lord’s Resistance Army?

Patrick Wegner is a PhD student at the University of Tübingen and the Max-Planck-Institute for Comparative Public Law and International Law. He is working on the impact of International Criminal Court investigations on ongoing intrastate conflicts. He blogs at Justice in Conflict.