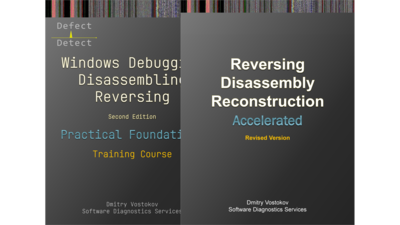 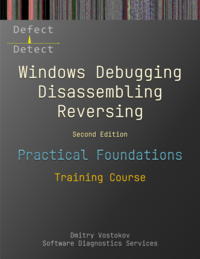 This training course is a combined, reformatted, improved, and modernized version of the two previous books Windows Debugging: Practical Foundations and x64 Windows Debugging: Practical Foundations, that drew inspiration from the original lectures we developed almost 18 years ago to train support and escalation engineers in debugging and crash dump analysis of memory dumps from Windows applications, services, and systems. At that time, when thinking about what material to deliver, we realized that a solid understanding of fundamentals like pointers is needed to analyze stack traces beyond a few WinDbg commands. Therefore, this book is not about bugs or debugging techniques but about the background knowledge everyone needs to start experimenting with WinDbg and learn from practical experience and read other advanced debugging books. This body of knowledge is what the author of this book possessed before starting memory dump analysis using WinDbg 18 years ago, which resulted in the number one debugging bestseller: multi-volume Memory Dump Analysis Anthology. Now, in retrospection, we see these practical foundations as relevant and necessary to acquire for beginners as they were 18 years ago because operating systems internals, assembly language, and compiler architecture haven't changed much in those years.

The book contains two separate sets of chapters and corresponding illustrations. They are named Chapter x86.NN and Chapter x64.NN respectively. The new format makes switching between and comparing x86 and x64 versions easy. There is some repetition of content due to the shared nature of x64 and x86 platforms. Both sets of chapters can be read independently. We included x86 chapters because many 3rd-party Windows applications are still 32-bit and executed in 32-bit compatibility mode on x64 Windows systems. The course consistently uses WinDbg (X86) for 32-bit examples and WinDbg (X64) for 64-bit examples. The book also has a larger format similar to other training courses from Software Diagnostics Services.

Almost 5 years have passed since the first edition of the combined training course that used the earlier version of Windows 10. Since then, we have also published "Practical Foundations of Linux Debugging, Disassembling, Reversing" and "Practical Foundations of ARM64 Linux Debugging, Disassembling, Reversing" books. At that time, we thought about revising our Windows course. Since then, Windows 11 appeared, and we also added Docker support for most of our Windows memory dump analysis courses. While working on the "Accelerated Windows Debugging 4D "course, we decided to make the second edition of Practical Foundations of Windows Debugging based on WinDbg from Windows 11 SDK and Visual Studio 2022 build tools and an optional Docker support for the exercise environment. We also changed the ":=" operator to "<-" in our pseudo-code for Intel disassembly syntax flavor to align with our recent Linux Practical Foundations books, which use "->" in pseudo-code for x64 AT&T disassembly syntax flavor and "<-" in pseudo-code for ARM64 disassembly syntax. All sample projects were recompiled, and many diagrams were redone for the new edition to reflect changes in code generation. WinDbg syntax and code highlighting were also improved. There are also minor additions for C++11 and C++20.

The book is useful for: 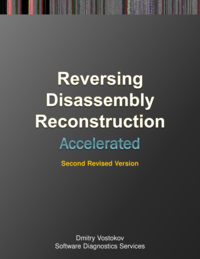 The book contains the full transcript of Software Diagnostics Services training. Learn disassembly, execution history reconstruction and binary reversing techniques for better software diagnostics, troubleshooting and debugging on x64 Windows platforms. The course uses a unique and innovative pattern-oriented analysis approach to speed up the learning curve. The training consists of practical step-by-step hands-on exercises using WinDbg and memory dumps. Covered more than 25 ADDR patterns, and many concepts are illustrated with Memory Cell Diagrams. The prerequisites for this training are working knowledge of C and C++ programming languages. Operating system internals and assembly language concepts are explained when necessary. The primary audience for this training is software technical support and escalation engineers who analyze memory dumps from complex software environments and need to go deeper in their analysis of abnormal software structure and behavior. The course is also useful for software engineers, quality assurance and software maintenance engineers who debug software running on diverse computer environments, security researchers, malware and memory forensics analysts who have never used WinDbg for analysis of computer memory. The revised edition uses the latest WinDbg 10 version, has three exercises completely redone with Windows 10 memory dumps, improved formatting, and also includes reprinted memory analysis patterns and techniques from Memory Dump Analysis Anthology referenced in the book.