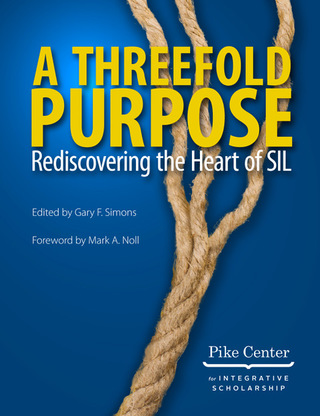 Rediscovering the Heart of SIL

When SIL was established in 1934, the founder articulated a threefold purpose which wove together scholarly research, Bible translation, and integral development in service of language communities on the margins of society. This book, which has its genesis in the efforts to found the Pike Center for Integrative Scholarship, relates the organizational history and ethos that helps to explain why we are establishing the Pike Center.

When the Summer Institute of Linguistics (SIL) was established in 1934, its founder, William Cameron Townsend, articulated a threefold purpose which wove together the strands of scholarly research, Bible translation, and integral development in service of language communities on the margins of society. When he launched the Wycliffe Bible Translators in 1942 as a branding strategy for supporting the work of SIL through fund raising and recruiting among churches in the United States, the strand of Bible translation is what received the focus. That strategy has been so successful that 80 years later SIL has engaged with thousands of language communities around the world. But it is Wycliffe which is widely known within the Christian public. SIL lies in its shadow, virtually unknown to that public.  Obscured in the shadows, as well, are the strands of scholarly research and integral development.

The aim of this book is to help the public rediscover the heart of SIL by examining those less familiar strands of the threefold purpose, especially the strand of scholarly research. The book is a collection of essays by three scholars who are long-time members of SIL—Gary F. Simons, Frederick A. (Boone) Aldridge, and M. Paul Lewis:

The remaining chapters touch on the three purposes in the order Townsend originally laid them out: research, translation, development.

This book has its genesis in the efforts to found the Pike Center for Integrative Scholarship. The Pike Center is an initiative supported by the Kenneth Pike Endowment for Integrative Scholarship. While we are pleased to share this book free of charge as a way of spreading the word about our cause, we also invite you to consider making a donation to the cause by paying for the book. All of the publisher earnings are directed to the Pike Endowment fund to support activities of the Pike Center. You may also make an online donation by following the above link to the Endowment web page. A donation made there will allow you to receive a tax-deductible receipt.

Gary F. Simons is the Chief Research Officer for SIL International (Dallas, TX) and Executive Editor of the Ethnologue (http://www.ethnologue.com/). He is also Adjunct Professor of Applied Linguistics at the Graduate Institute of Applied Linguistics (Dallas, TX). Early in his career he was involved in language development activities in Papua New Guinea and Solomon Islands.  More recently he has contributed to the development of cyberinfrastructure for linguistics as co-founder of the Open Language Archives Community (http://www.language-archives.org/) and co-developer of the ISO 639-3 standard of three-letter identifiers for all known languages of the world (http://www.sil.org/iso639-3/). He holds a PhD in general linguistics (with minor emphases in computer science and classics) from Cornell University. He is an author or editor of over 100 publications (http://www.sil.org/~simonsg/).

This book is published on Leanpub by Pike Center

Pike Center for Integrative Scholarship is an initiative of SIL International that builds capacity for language development through scholarship. SIL works alongside ethnolinguistic communities as they discover how language development addresses the challenging areas of their daily lives—social, cultural, political, economic and spiritual.

One of Pike Center’s strategies for building capacity is to grow the needed bodies of knowledge through its Agile Publishing program. We are using this lean publishing platform to give our affiliated scholars a platform for developing and refining new contributions to growing bodies of knowledge that support the language development movement. Many of our titles are still in a preliminary stage of development. Others are finished but have such a narrow audience that we have not elected to turn them into print books. Still others have reached the maturity of becoming a print book; in such cases, this is indicated by a link on the landing page for the book.

All of the revenues generated through sales on this site are directed to the Pike Center to support the on-going research activities of its affiliated scholars. Naming a higher price when you purchase one of our books is a way of contributing to this cause. Or you may go to the Pike Center website to make a donation that will receive a tax-deductible receipt.