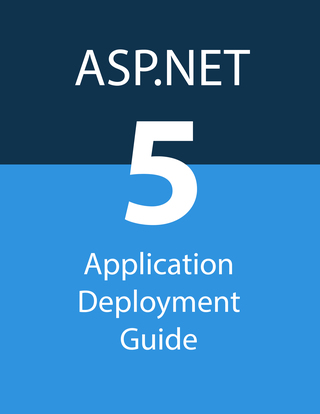 Paul Stovell
ASP.NET 5 brings a new runtime, a new hosting model, and new production deployment considerations. This short e-book explains everything you need to know about how ASP.NET 5 applications run, an how to deploy them to production.
Free!
With Membership
$7.99
Without Membership

This is a work-in-progress e-book that covers everything you need to know about deploying ASP.NET 5 applications to production. It will cover:

Right now we're in very early stages, so follow along and watch it evolve.

Paul Stovell is the founder of Octopus Deploy, an automated deployment tool for .NET developers. Paul started Octopus in 2011 as an attempt to help himself and other developers to more reliably and easily deploy software to production. Since then, Octopus has grown up and now helps over 2000 customers around the world to automate their deployments. Prior to Octopus, Paul worked for an investment bank in London, and in Australia for Readify, a .NET consulting firm. He was a Microoft MVP for 6 years.