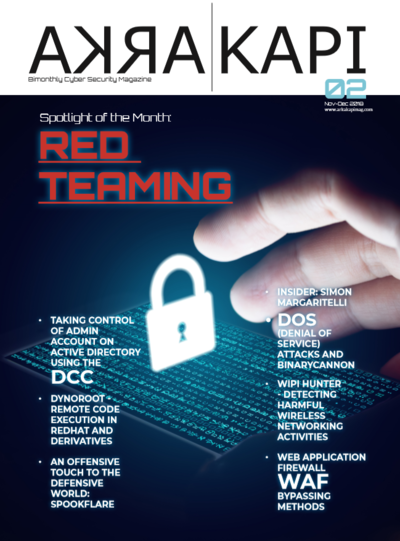 Arka Kapı is a bimonthly cybersecurity magazine made by hackers for hackers. It’s aiming to raise awareness for being conscious users on the ever changing world of technology. Our magazine features articles that are informative, step-by-step instructions, how-to guides, interviews with prominent figures in security, and hacker news.

The cybersecurity sector borrows many terms from the military jargon because believe it or not, this is an ongoing war. Sometimes the atmosphere is more mischievous than the Cold War, and sometimes it’s far more hot and effective than the battlefield.

One of the commonly used terminologies adapted from the war zone to cybersecurity was the Red Team concept. In military strategies, Red Team methodology stands for pretending to be the hostile forces to model out the worst scenario and measure the durability of the friendly forces.

The attackers are always a step ahead. So Red Teaming allows the course of the battle to have a drastic change. Just like the microbes vaccinated into the body to defend against illnesses, thinking like the enemy helps build a stronger defense.

This is why the concept of Red Team has been very popular in the past few years in cybersecurity. Instead of playing devil’s advocate, you have to think like the devil to discover the most evil plans and test them on the system

* How I hacked into a college’s website! - Aditya Anand