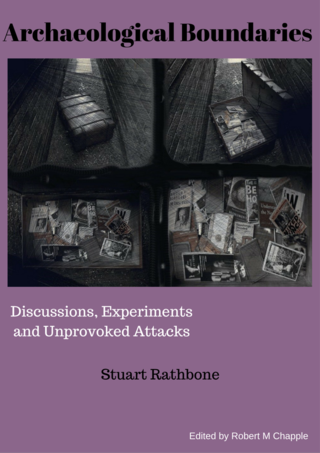 Robert M Chapple (Editor) and Stuart Rathbone
A selection of essays about professional archaeology, theoretical archaeology and prehistoric settlement archaeology that are intended to be entertaining, amusing and original.
Free!
With Membership
$18.99
Suggested price

‘Archaeological Boundaries. Discussions, experiments and unprovoked attacks’ is a unique offering by Stuart Rathbone. The book contains a series of essays that explore three areas of his archaeological interests; the development of Archaeology as a profession, interpreting prehistoric settlement patterns, and the application of unusual, even oddball, approaches and theories to long standing archaeological problems. Throughout the different sections of the book a series of common themes and influences are woven through the highly personal and hopefully thought provoking offerings.

I was born in London in 1971 and was brought up in the west of Ireland. After receiving BA (UCG 1991) and MA (NUIG 1998) degrees in archaeology I worked as a commercial-sector field archaeologist for over 20 years. Although I left archaeology as my day job in 2011, I remain involved through archaeological blogging (Robert M Chapple, Archaeologist) and my Irish Radiocarbon and Dendrochronological Dates research project. Since 1997 I have been based in Belfast, Northern Ireland, where I live with my wife, Jeanne, and our two sons (Bertie & Oscar), one cat (Norman), two fish (Finlay & SuperLegoLifter), and a menagerie of imaginary, anthropomorphised dinosaurs (Bulstrode), dogs (Shakey), and bears (Bearey).

Stuart Rathbone was born and raised in Rugby in the English West Midlands and studied archaeology at Bournemouth University. Upon finishing college he was offered a choice between a 50 pounds a week trainee position on an urban excavation in Canterbury in Southern England and a 300 punt a week job as a site assistant on the M1 motorway in the Irish Republic. He did not return to England for 12 years. Between 2001 and 2008 he worked on several hundred excavations for ACS Ltd, one of the larger commercial archaeology firms in Ireland. He became a License Eligible Archaeologist at the start of 2006 and ran a series of large excavations and assessments in different parts of Leinster. In 2008 he began working as the Director of Fieldwork for the Achill Archaeological Field School, located on Achill Island, Co Mayo, where he completed four successive field seasons. In 2012 he returned to England where he spent six hateful months in Bury St Edmunds. Throughout 2013 he lived on the remote Shetland Islands off the north coast of Scotland where he was engaged to monitor groundworks at a major gas processing plant. That job was so undemanding that he began working on this book to give him something to do other than watching the Arctic Hares change colour. In the summer of that year he was able to spend several weeks working on the Ness of Brodgar excavations in Orkney, fulfilling a major archaeological ambition. At the start of 2014 Stuart returned to Achill Island where he completed a fifth season of research excavations. In October of that year he emigrated to America where he now resides with his beautiful wife in Reno, Nevada. He began working for a commercial archaeology firm in Reno which was going fine until they started to mention camping and it turned out they weren’t joking. He currently splits his time evenly between America and Europe, managing promotions and bookings for Achill Archaeological Field School during the winter and directing their excavations and surveying projects during the summer. In his spare time he is working on a post graduate research project with IT Sligo examining the Napoleonic era Signal Towers of North West Ireland. He hopes that in his next life he will be able to secure a real job.

Writing Archaeology in the 21st  century

1) 99 Problems but a ditch ain't one: Reflections on the great Irish archaeology boom

2) How to dig holes and alienate people

3) The 4 and a half Inch pointing trowel... and the damage done

5) An archaeologist, an anthropologist and an anarchist walk into a bar

7) Archaeology from the Interzone

8) Exploring the Jungle. Contemporary archaeology gets a little bit darker

9) The village people. An early history of neighbourly disputes