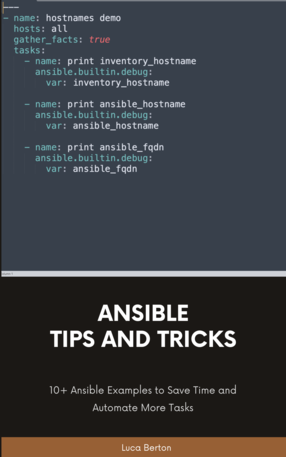 10+ Ansible Examples to Save Time and Automate More Tasks

Looking to learn Ansible Playbook code from scratch or update an existing project? Automate your System Administrator's day-to-day tasks with the Ansible Open Source IT automation tool. Learn how to use 10+ Examples to easily provision and manage your servers.

Learn the Ansible automation technology with some real-life examples.

Every successful IT department needs automation nowadays for bare metal servers, virtual machines, could, containers, and edge computing. Automate your IT journey with Ansible automation technology.

I'm going to teach you example by example how to accomplish the most common System Administrator tasks.

Each of the 10+ lessons summarizes a real-life scenario and the most important module description and the most important parameter to succeed in your journey. Moreover, each code is battle proved in the real life. Console interaction and verification are included in every video. A mundane activity like printing a text/variable during execution, Pause execution, How to Pass Variables to Ansible Playbook in the command line, breaking a string over multiple lines, Ansible ansible_hostname vs inventory_hostname, setting remote environment per task or play, executing a command on the Ansible localhost, three options to Safely Limit Ansible Playbooks Execution to a Single Machine, command vs shell modules, write a Variable to a File and these are only some of the long lists included in the course.

There are some Ansible codes usable in all the Linux systems.

Are you ready to automate your day with Ansible to the next level?

Luca Berton is an Ansible Automation Engineer of Red Hat, based in Brno - Czech Republic. With more than 15 years of experience as a System Administrator, he has strong expertise in Infrastructure Hardening and Automation. Enthusiast of the Open Source supports the community sharing his knowledge in different events of public access. Geek by nature, Linux by choice, Fedora of course.