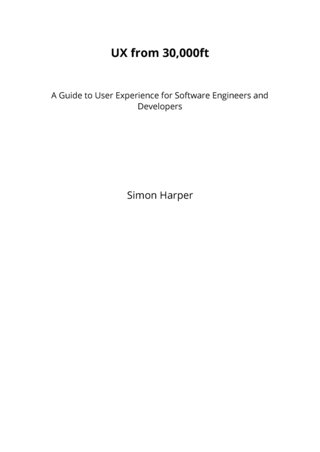 A Guide to User Experience for Software Engineers and Developers

Simon Harper
Are you an Software Engineer or Developer who wants to know more about those pesky users; or how to decipher what the heck that UX specialist is talking about? Do you need to get more involved in the development and engineering of the interface? Or are you a UX specialist that needs to understand the best ways of conveying information to the development team? If the answer to any of these questions is 'YES' then this high level overview will help you get started, and signpost you to more specialist books, current research, best practice, and international standards.
$5.00
Minimum price
$20.00
Suggested price

HCI is one of the most important aspects of computer science and application development, and UX is a mostly applied sub-domain of HCI; this is especially the case when that application development is focused on providing humans with access to the program functionality. But this is not the only concern of UX, indeed for many, it is the augmentation of the interactive processes and behaviours of the human in an attempt to deal with an ever more contemplated world that is the focus. This augmentation does not take the form of artificial intelligence or even cybernetics, but by enabling us to interact with computer systems more effectively, to understand the information that they are processing, and to allow us to focus more completely on the intellectual challenges; as opposed to those which are merely administrative or banal.

For many of you this will be your first exposure to the wider discipline of Human Computer Interaction (HCI) and User Experience (UX). Some of you may have already experienced some basic UX work as part of the software engineering lifecycle, however this text takes a far more in-depth look at the tools, techniques, and knowledge you need to understand the user experience within software engineering.

It is worth noting that while this text is more in depth than those to which you may already have been exposed, it is by no means intended to teach you everything you need to know about human facing software engineering. Indeed, entire undergraduate degrees are built around the subject of human factors and ergonomics and you should not confuse this high-level overview of the domain with the knowledge you would acquire in an undergraduate degree programme. This said the aim of this text is to give you, the reader, the tools, techniques, and the mindset necessary to competently approach your first user testing and user experience job. The text is designed from a practical perspective and will enable you to take a junior role in a user experience department, or usability company, and will provide you with the overall knowledge to communicate with others and make sensible suggestions regarding UX work. Further, it will provide you with a basis for future self study within the UX domain or the wider human factors world.

I am an experimental Computer Scientist working in Human Computer Interaction and Information Systems as well as being a Reader in Human Computer Interaction (Computer Science), an Association for Computing Machinery (ACM) Distinguished Scientist awarded for contributions to HCI, and Research Lead for the Interaction Analysis and Modelling Laboritory at the University of Manchester. I work in Human Computer Interaction and Information Systems. My particular interest is in Assistive Technologies (AT) in the domain of Accessibility with specific regard to profound blindness and visual disability. My work is centred around understanding, predicting, and influencing a user’s interactions and flow through interfaces and information, while taking into account neurophysiological, cognitive, behavioural, perceptual, and technological factors. My contributions lay in the development of adaptive user models of extreme users and/or extreme environments. I have been working in Assistive technology for Accessibility for over 15 years.

I have delivered invited talks to the Manchester Informatics Human Behaviour Network (2014), Loughborough University HCI ‘GuruLecture’ (2014 and 2013), the Technical Superior Insitute, LaSIGE, Lisbon, Portugal (2012); Informatika Fakultatea, UPV-EHU, Spain (2011); Fujitsu Labs Europe (2010); IBM Tokyo Research Laboratory (2009); and keynoted the WebMedia conference (2008); and a Cafe Scientifique talk in 2015. I am also a recipient of the ACM Doug Engelbart prize (2000), the ADDW IBM Research prize (2005), the Microsoft Web Accessibility Judges Award at the W4A (2008), and the Best Paper Award at W4A (2010). My last book ‘Web Accessibility: A Foundation for Research’ has for two years ranked in the Amazon - Human Computer Interaction top 40, and in the top 10 for six months after it’s publication.