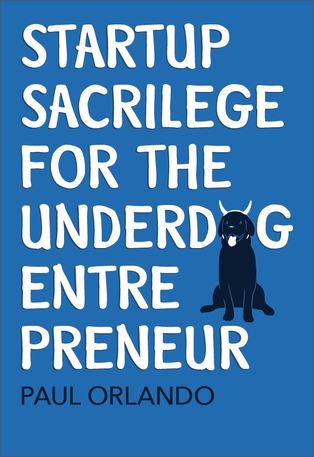 for the Underdog Entrepreneur

Don't identify with the mainstream startup world? Working on a startup outside of a tech hub or in an unfashionable industry? Maybe that makes you an underdog entrepreneur. This book is for you.

Written based on experiences from founding a successful startup accelerator in an emerging tech hub, from talking to lots of other entrepreneurs and community leaders arond the world and from teaching entrepreneurship as an adjunct professor.

Startups and community organizers outside of the mainstream are being misled. Startup Sacrilege includes lessons learned and solutions, especially for startups and community organizers outside of established tech hubs. It's an alternative view that challenges startup world assumptions and makes suggestions for what to do instead.

Read Paul's other writing on startups and on second-order thinking.

Paul Orlando is an entrepreneur who often takes a contrarian approach to the startup world. He runs the University of Southern California Incubator Program (USC Incubator) and is Professor of Entrepreneurship at USC. Previously, he was Co-founder and Director of AcceleratorHK, a mobile startup accelerator and runs Startups Unplugged Advisory for early-stage companies and corporates. Previously, he also led a startup in New York, developed new communication services and most recently helped Hong Kong build its startup ecosystem.

Paul is proud of a win at the TechCrunch Disrupt Hackathon. He graduated from Cornell and Columbia.

His work has been featured in media outlets including TechCrunch, Forbes and The Next Web.

Get the book plus a license for 10 readers. Great for sharing within your company, community or school.