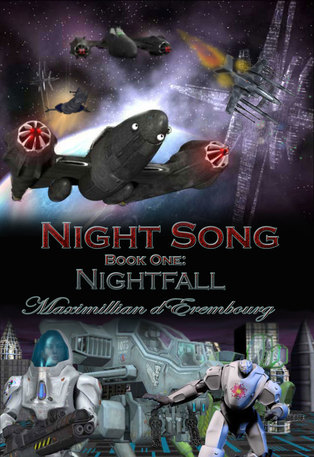 Nightfall Book One, Volume One of the Nightsong Saga

Nightfall Book One, Volume One of the Nightsong Saga

Serialized: Volume I of III

Nightsong, Book One: Nightfall, a novel in three Volumes.

Please Note: This Volume One release contains Nightsong: Nightfall Chapters 0 through 10, it is not a complete book, but instead being serialized 11 chapters at a time. Chapters 11 through 21 will be released as Volume II in April. Volume III, Chapters 22-33 will be released by June, at which time the entire work as one unit will be re-released as a single work on Amazon. This complete work will become Nightfall, Book One of the Nightsong Saga, the first of the fifteen book series. Serializing of novels as a way to first release them used to be all the rage. Conan Doyle serialized several Holms novels; Dickens first serialized almost all of his books, including Oliver Twist. This utilizes Leanpub's system of allowing authors to publish unfinished works which can be revised an unlimited number of times before a "final" version is published.

Nightsong, Nightfall --on Leanpub-- will initially be released in three Volumes of eleven Chapters each.

Like many modern fantasy novels targeted at adults, Nightsong contains some sexual scenes and situations, but the book is not erotica.

Nightsong--as a sci-fi-series--is a story of human strife, survival, and eventual triumph under brutal tyrannical conditions. Three heroes at odds with each other must strive to come together in order to fight an empire that swallowed up their world, and they will do anything to achieve vengeance and freedom for their peoples. As Book One of Nightsong opens, Prince Morgan "Blackskull" Valori is a conceited 21 year old, a prince who--being born the third son--has no prospects for ever ruling the planet of Alaria. Like his favorite uncle, he will live his life in the fast-lane and the public-eye, his only excitement being the screams of millions of race fans, the dying gasps of his sword-fighting opponents, and the more private cries of his many lovers. Morgan will be idolized by many Alarians for being "their Black Prince," but he will never rule them. As the one his brothers hold responsible for his father's death at the hands of Black Dragon pirates three years before, Morgan has fought a personal crusade to kill as many pirates as he can, struggling to wipe out his personal guilt by doing so. Kyrie "Blaize" Saturai (25) grew-up a strong-willed and beautiful young woman in one of Alaria's most powerful corporate households, niece of Phoenix Corp's CEO and founder, the legendary "heartless" Gordon Xycor. Phoenix Corp makes medical devices that can practically bring the dead back to life, but its fringe science is suspicious to most, even hated by many. Three years older than Prince Morgan, Kyrie also goes into the fast-paced life of a corvette racer, making a billion fans--men and women--lust for her gorgeous form. Conspiracy theories point to Phoenix Corp as the source of the technology behind the success of the Black Dragon cartel, and for this Prince Morgan has formed a natural hatred of their public representative, Kyrie Saturai. Ciro "Andronicus" Andrews (45) managed to achieve all he ever really wanted by escaping his former life as a brutal space-pirate. Not just any pirate, but the son of the Draco himself, the head of the Black Dragon cartel. After falling in love with one of his clan's psychic slaves, Ciro stole a ship and left the life of blood-gold behind, starting a family of his own shortly thereafter. Each of these people have their lives shattered when--in a mere fifteen minute period--the Terran Empire violently and brutally conquers their world - Alaria. Being written for adults--instead of nine year-olds--Nightsong has a more complex structure than Star Wars books. (Spoilers have been removed) Welcome to the return of character development in science fiction, with a plot that's just a shade of Game of Thrones in space.

A life-time sci-fi fan and Quantum science geek, I have been writing since 1980. In 1986 the setting for this book (Alaria), and several of its characters (Ariton and his crew) were first created. This led to several short stories regarding the adventures of a much younger Ariton Orionis, and his ship the Indefatigable, in the service of the star-kingdom Alaria. In 1999 I created Ciro and Kyrie for a Star Wars novel. He was a smuggler who had lost his family in the attack on Alderan, she was a recruitment agent for the Rebel Alliance.

When friends convinced me to change the book into a universe of my own, I went back to the setting of Alaria, and combined the worlds and characters. Morgan joined the cast later still, relegating Ariton to the position of an elder mentor to the hero, who becomes an opponent of Morgan's recklessness.

In years to come, I shall release some of the younger Ariton's adventures as prequels.

I have been in the entertainment industry; I have had big-time NY literary representation, though for Nightsong's TV manuscript. I am proud to say that Ray Bradbury read Nightsong as a TV pilot manuscript before he died. Ray Bradbury read the draft of Nightsong, commenting that he was honored to do so. I was one of Ray Bradbury's students, when the sci-fi legend came to San Diego on a speaking tour.

I have been published; a sci-fi short story of mine, Sphinx, was published by noted sci-fi author E.S. Wynn, in his e-zine Farther Stars; it was the main feature of his 9-13-12 weekly edition.

Adriane selflessly contributed art and time to the original TV project. Though no longer in the theater, Adriane still does commissioned costume pieces, props, set-pieces, puppetry and more. Check out her beautiful work: www.adrianeprops.com
Dennis Riddle

Dennis helped with plot and character ideas, general encouragement, and simply giving me someone to talk to (my brain often fails to engage unless I have someone besides myself to talk to) ever since 2001, when Night Song was being developed as a TV series pitch and manuscript. he is now in charge of getting the word out about the novela serial.
Jane Letty

Jane Letty was my big-time NY literary agent. She represented the TV manuscript version of Night Song, when I was pitching it as a TV series. She and I "met" over a four-hour phone call that she placed from NY to San Diego. We agreed on so much about Sci-fi, TV, and writing that I knew I had found a terrific fit for my TV manuscript with her firm. Unfortunately, her firm ceased to be before any deal for Night Song's TV version could come to be. She has since retired from agenting, but will always have a place in my heart for initially believing in me and my work.
Mark Engelhart

When my big-time NY literary agent saw my script for the two-hour Night Song TV pilot, she asked me to make a one-hour version, which she thought might be easier to sell to a studio. But how was I to cut half the material from my pilot script and still have something compelling left over? I immediately went to my author friend Mark Engelhart. He helped by making lots of suggestions and a re-write suggestion..
Micheal Rack

Micheal's work constitutes most of the material for the cover, though I did the art direction and arrangement.