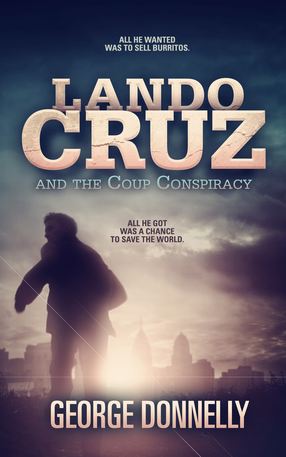 Lando Cruz and The Coup Conspiracy

Lando Cruz and The Coup Conspiracy

George Donnelly
A scrappy black market rebel in a dystopian near-future risks both his life and his principles to get his sister back from corrupt cops before they sell her into sex slavery.
$7.99
Minimum price
$7.99
Suggested price

The United States is in slow-motion economic collapse. The Three Strikes Act funnels the unemployed masses into a national network of work camps for the most trivial of infractions.

Lando Cruz is a scrappy rebel who risks his final strike on the streets of Philadelphia by trading illegal currencies under cover of a burrito stand. He spends his days bribing dirty cops, fending off undercover federal agents and shepherding his little sister through adolescence.

Lando is getting by until beat cops seize his savings and kidnap his sister for ransom. He has thirty days to raise the hard cash he needs to free her before she is sold into sex slavery. His only chance is a lucrative job offer from the black market rebellion's paramilitary startup, the Core. He risks both his life and his principles to get his sister back before time runs out.

Rebel. Troublemaker. Accused Terrorist. Idealist. When not dreaming up new rebel heroes, George hikes and bikes Colombian mountains and unschools his 8-year-old son Clark (who is named after Superman but actually likes Batman way better). George is from Pennsylvania but has lived in Chicago, Osaka, Kobe, Bogota and Medellín, too. He’s a firm believer in human rights, universal fairness and abundant hugs before bedtime. He’s got two rescued kittens and an aging golden retriever named Simon on the payroll as well. Connect with him at GeorgeDonnelly.com.

Jason Gurley is an independent author and book cover designer from Portland, Oregon.