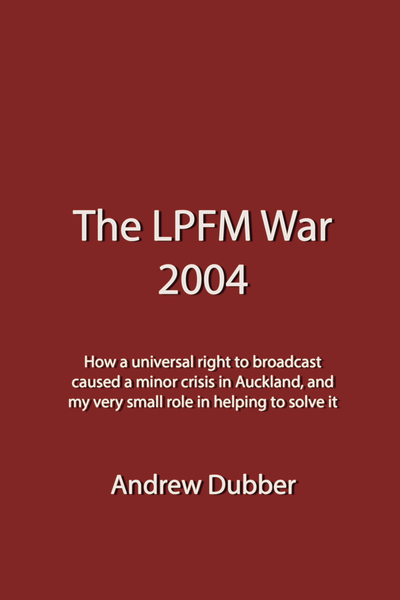 How a universal right to broadcast caused a minor crisis, and my very small role in helping solve it

Andrew Dubber
New Zealand is the only country in the world where anybody who wants to can simply buy an FM transmitter, switch it on and start broadcasting. You don't have to ask anyone. You don't have to pay for the frequency. But there are some rules. Not everyone follows the rules.
Table of Contents

New Zealand is the only country in the world where anybody who wants to can simply buy an FM transmitter, switch it on and start broadcasting. You don't have to ask anyone. You don't have to pay for the frequency. But there are some rules.

It creates an interesting situation, and its one that other countries (especially Britain) could learn from. You can gain a lot by letting go of some of the restrictions on the spectrum. That said, it's not without it's problems. And these problems came to a head in May 2004. Tempers were high. Extreme measures were being contemplated. Sabotage was occurring pretty regularly.

But like many problems, these are the sort that can be addressed by getting a bunch of people in a room and talking about it. What started as something of a war became something of a delicately held peace through cooperation, collaboration and the willingness to compromise in order to make it work for everyone. Because a worse thing than losing a bit of valuable ground is having it all taken away from you.

This is a series of blog posts I wrote at the time that explains what happened, and what I decided to do about it. I'm not taking credit for the work that's been done. Not by any stretch of the imagination. All I did was put the right people in the same room with each other. A catalyst, if you like. Right person, right place, right time.

But the fact that the Low Power FM Association of New Zealand still exists, meets and solves these sorts of problems ten years later is something I'm very proud of.