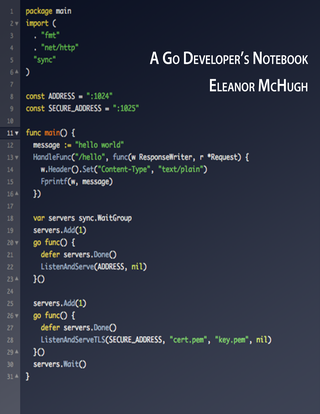 or, What I Do During My Holidays

A Go Developer's Notebook is a living book about the Go language and programming in general, written by a long-standing member of the Go community and based on her experience working with Go since its initial public release in November 2009.

This is the book that I wish had existed when I first started exploring the Go language, built around code examples I could have played with at my own pace.

It's also like the book I wish had existed when I first started programming - an amalgam of the magazine articles which taught me to code and the wisdom (or not) conferred by thirty-plus years of doing just that. I hope it's as readable to the interested teenager taking their first steps into hacking as it is the university graduate armed with a wealth of theory but looking for practical insight.

It's also more generally a book about reading and writing code, and about many areas of computing which fascinate me. Perhaps they'll fascinate you too!

One thing this isn't is a professional book, by which I mean that it's not concerned with helping a professional developer quickly transition from another programming language to Go. There are plenty of those already in print, written by much better teachers than me. Instead my aim in this text is to provide a much deeper exploration of subjects I'm interested in through the lens of Go, teaching the language almost as an after-thought.

The didactic style is brutally simple and old-school: write code, explain code, modify code, explain changes, repeat as necessary. Along the way I'll do my best to explain what each example is trying to achieve, and the thinking which evolves it towards its final form.

Each chapter is built around a particular programming task which I use to demonstrate how various features of the Go language can be used as well as to share many of the things I've learned during several decades of coding. Some of these programming tasks may appear deceptively simple, others totally irrelevant to the life of a commercial developer. I intend to disabuse you of both notions, whilst at the same time keeping this a Hacker's Notebook: depending on your outlook this is either a logbook of experiments undertaken and rabbit-holes delved in pursuit of knowledge, or a grimoire of the esoteric and unutterably unconscionable.

If the choice of subject matter at times seems eccentric, remember that my target audience is my teenage self, hunched starry eyed and clueless over an 8-bit micro, not the fortysomething code diva I've since become. My teenage self knew nothing about reading code, testing, refactoring, the scientific method, clean coding style, or academic theory.

As the reader you don't need to know any of these things either, though if you do I hope you'll still find some useful nuggets to add to your toolkit.

So in essence this is a book inspired by my love of programming for the sake of programming, my disillusionment with the widespread desire to teach professional programming at the expense of exploration and fun, and my hope that readers of all ages will find the same pleasure in reading this book that I've experienced in researching and writing it.

There's a google plus community for discussions and a public github repo with the code for each completed narrative section.

To further whet your appetite I provide a free sample comprising an introduction to concurrent network programming with Go that includes practical encryption and is probably sufficient for a professional developer to get up to speed with the language. If that's all you're after, enjoy this free gift.

I've also given a brief presentation on the philosophy behind this living book.

London-based hacker Ellie has a passion for the esoteric corners of programming stretching back to her misspent teenage years. During the course of her career she's worked on mission critical systems ranging from avionics to banking security and now devotes her time to writing digital romances in Ruby and Go.

As a responsible parent she enjoys polyhedral dice, home brewing and gothic music.