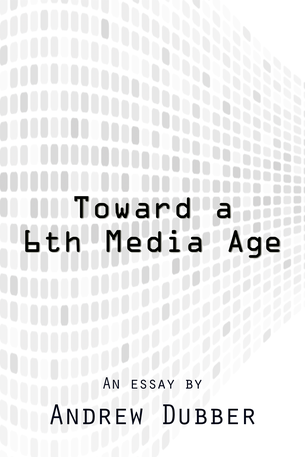 Toward a 6th Media Age (The Essay)

Toward a 6th Media Age

An essay about the world in which we live

Andrew Dubber
This essay is an exploration of the notion of what it means to live in the "Digital Age". What ages existed before it - and what comes next? How do we make sense of what it means to be digital, and how does this shape who we are as human beings?
Free!
Minimum price
$0.00
Suggested price

Over my years as an academic, I have developed several pillars of my research. These are ideas I return to time and time again as a leaping off point for understanding other things. I thought it was time I started to put some of them in a form that I can point to as a shorthand so that I don't have to rehash old territory over and over again. Thankfully, we live in the Digital Age, and I can just publish my ideas and be done with it.

This is an article I have written in a number of different ways over the years. The idea of 'five media ages' has appeared in a couple of blog posts, and it also forms part of the setup in my book Radio in the Digital Age. But I've never quite been satisfied with the way in which the idea is stated, and it's never managed to be something standalone that I can refer to in other work, point people to or bring out to discuss.

I've also wanted to have it in a form that is easily readable and shareable, not too bogged down in academic language, but thoughtful and scholarly at the same time. I think it's an important idea, as ideas go, and it helps make sense of a lot of things. I use it to make sense of the media and music industries, but you may find it a helpful tool to apply to other areas of endeavour.

There are key phenomena that mark out the era in which we live. These are times in which government bodies of foreign nations can intercept and examine every piece of communication we exchange. In which we can go grocery shopping in the middle of the night without leaving the house in the name of convenience. In which we can quantify every aspect of our day to day activities through the use of a wearable device. In which we can speak face to face with relatives on the other side of the world as a matter of course. In which we can navigate to places we have never been with the aid of a speaking device that always knows the way. In which 10 million private homes around the world have their floors cleaned by a robot. In which national revolution is plotted and organised within a context provided free of charge by a global commercial corporation, supported by advertising. In which the vast majority of what we read, watch, hear, write, say and do takes place in a computer-mediated environment.

Very few people would dispute the notion that we live in a Digital Age. It's almost a redundant statement - something taken for granted when speaking about anything at all that takes place here in the 21st century. Of course it's the Digital Age - I mean, look how digital. But the phrase needs a little unpacking.

We don't simply "use a lot of digital things", we live in a digital age. That is - we inhabit digitalness.

This is a period in history. There have been others. If this is the digital one, what were the others, and is there a pattern emerging between them? What can we learn about ourselves, about culture or even about the future by periodising history? How long will the Digital Age last, and what comes after it?