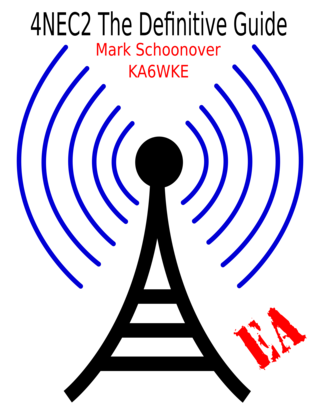 Learn how to use 4NEC2 in the design and analysis of antenna systems.

Learn how to use 4NEC2 in the design and analysis of antenna systems. With a sample version and a full (paid) version of the book, the reader will start from downloading and installing 4NEC2, learning the 4NEC2 user interface, build a 20M dipole and analyze it at various heights above real ground then view the different antenna patterns. The sample version of the book will get anyone started with 4NEC2, or to learn 4NEC2 if you're already familiar with other antenna analysis software.

Mark Schoonover has been licensed since 1982 when he got his Novice license on a wager with his dad. If he didn't pass his Novice test, he had to mow the lawn for FREE all summer break. He got his General license in 1983 from the now long closed FCC Field Office in San Francisco. Upon his return from Navy active duty in 1987 he got his Advanced license. Around 2000 he got his Extra. He's held his call since 1982 and don't have any plans to obtain a vanity call. He enjoys homebrewing and contesting from his pip-squeak station in southern California. Professionally, he has a degree in Computer Science and Software Engineering. He switched from Electrical Engineering when the internet became publicly available. Currently he's a Senior Systems Engineer for a major health care provider in the United States. He's been married to his best friend for 23 years and they have three boys all in college. On the occasions they are being too loud, he's been known to launch a denial of service attack against their gaming computers!