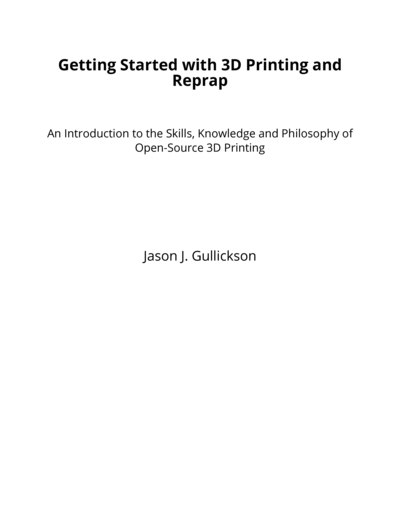 Getting Started with 3D Printing and Reprap

Getting Started with 3D Printing and Reprap

An Introduction to the Skills, Knowledge and Philosophy of Open-Source 3D Printing

The goal of this book is to provide an introduction to 3D printing and The Reprap Project, and to give the reader the skills and the knowledge necissary to design & print a digital object they can hold in their very own hands.

While much hyped by the media and companies selling 3D printing equiptment, there are few sources of information for the casually curious about how 3D printing works, what it can be used for and how to get started.  There is a lot of information avaliable online, however the amount of it can be overwhelming, even for the technically-inclined.  In this book I try to capture the essential components of 3D printers, describe how they work in simple and direct terms and provide a number of examples, exercises and walk-throughs in order to provide anyone with enough information and experience to decide for themselves if they are interested in learning more, purchasing a printer of their own or building one themselves.

This book is the culmination of my experience in building and operating my own Reprap 3D printer, experiences with the Reprap community and the work I have done to share information about 3D printing technology with my local communities.

Jason J. Gullickson has been researching, building, designing and printing 3D printers and other models since 2009, and has been pioneering the field of "transmaterialization" (moving objects between physical and virtual worlds) since 1988.

Jason built his first Reprap 3D printer in 2013 and has continued to improve it ever since.  An active Open-Source developer and advocate, all work Jason has done in the field has been contributed back to the community, much of which can be found on his Github page: https://github.com/jjg.