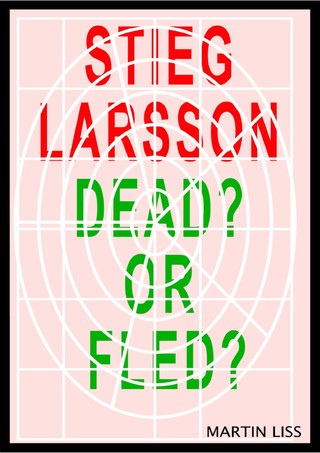 The Boy who died a faked death.

Martin Liss
Do you also believe that the famous Stieg Larsson is not dead? Do you believe that an author that just got paid $ 60 000, dies in a heartattack? Why would he die? He had been threatened to death for 15 years, he finally found his way out, he took his "retirement funds" published it and is now living on the money, not even taxing for the treasure!!! Do you want to know how he did? Maybe one day you can do the same? The freedom of speach protect this work of art. May Steig and Charlie live!
$5.00
Minimum price
$5.00
Suggested price

Stieg knew that the books were telling stories that had not been told before. He was used to be hated and hunted by Nazis and rasists. He had been running the war against them for years. He were even paid by Scotland Yard for teaching them about Right Extremists... But this book told the whole world about how high Politic profiles had done things that were more than secret, things that were dangerous to tell.

Stieg knew suddenly that he could not stay in life if these books were printed and sold to the public.

By the way, wouldn't it be a better best seller if the artist were already dead when the books came out?

Stieg Started to play with the thought of beeing dead, as in "Blair Whitch project". Then he woke up from the thoughts and started to think more practical. How could he fake a death? How could one stay alive after ones death? How much money would it take to die? And then, still be alive? Would he be able to live on the money that the books could generate? Who could he engage in his death? His partner? His friends at work? Is it leagal to protect someone that is faked dead? But alive? Is it a crime to not die that way?

I read Stieg Larssons triology, not knowing that Stieg was "dead". Once I read all I asked for more and someone said he was dead, I just got the freeze and thought, yeah sure, what a joke! So I started to do research about his life before his death and also about his books lifes and family after his death.

This book Is a Fiction book, one have to understand that it is not based on any real proofs, but on a lot of suspicious persons thoughts of Stieg Larsson.

Why was he such a secret person when he was alive?

Why did his Partner go to the editorial to get the books printed? She was as tired of the threats they lived under during his last 15 years. Why make it worse? Think of it, the triology is a suicidual work. A Requiem.

Now some one else (David Lagercrantz) is writing the continuation about Lisbeth Salander. Even if it will be a good book, I will not read it. I can not. I can not read a book that is written by someone else after what have happened with the real author.

I LOVE the books and the mystery around Stieg Larsson, dead or Alive, he has opened a new genre in the book shelf for me.

Stieg have inspired me to write as I never wrote before.

coming up is also: