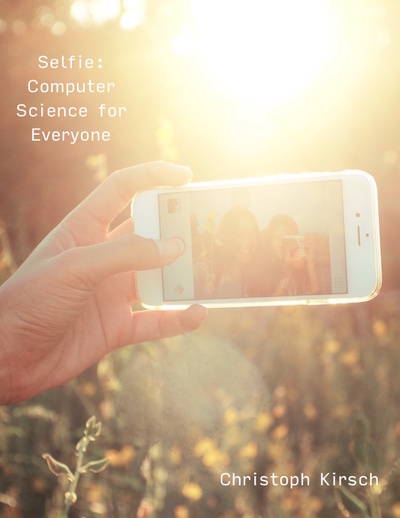 Selfie: Computer Science for Everyone

Selfie: Computer Science for Everyone

This book is an introduction to computer science for people who use computers every day without knowing how they really work but always wanted to know how they actually work. The idea is to teach many of the surprisingly simple, basic principles in computer science that are relevant for truly understanding what is going on in a single book. The...

Computer science is a mystery to so many and yet more and more people use computers every day in one form or another. There are increasingly many people with all kinds of backgrounds other than computer science that even develop software, sometimes without even knowing it. At colleges and universities around the world there is hardly anyone left who is not confronted with the machine and its code. While a book about computer science for everyone may sound appealing it actually requires serious commitment to understand the material even though we tried very hard to simplify everything as much as possible. The reason is that computers and software are so expressive that it is unlikely that any other computational machine in the future will be more expressive. Anything that can be computed can be computed now, if you have enough time. Selfie is an educational software system that has grown out of many years of teaching undergraduate and graduate classes in computer science. The key observation is that understanding the meaning of software and ultimately the behavior of a computer can only be achieved by understanding how software translates all the way down to the bits of the machine. Selfie shows how to do that. This may sound scary but can actually be done in a systematic fashion using only basic principles.

Disclaimer: This is work in progress. Only two chapters are done. There is also the draft of a third chapter included in this version. More chapters exist in draft form but will take more time to be done. For more information including source code of selfie and this book refer to selfie.cs.uni-salzburg.at

Christoph Kirsch is Professor at the Department of Computer Sciences of the University of Salzburg, Austria. He received his Dr.Ing. degree from Saarland University, Saarbrücken, Germany, in 1999 while at the Max Planck Institute for Computer Science. From 1999 to 2004 he worked as Postdoctoral Researcher at the Department of Electrical Engineering and Computer Sciences of the University of California, Berkeley. He later returned to Berkeley as Visiting Scholar (2008-2013) and Visiting Professor (2014) at the Department of Civil and Environmental Engineering as part of a collaborative research effort in Cyber-Physical Systems. His most recent research interests are in concurrent data structures, memory management, and so-called spatial programming. Dr. Kirsch co-invented embedded programming languages and systems such as Giotto, HTL, and the Embedded Machine, and more recently co-designed high-performance, multicore-scalable concurrent data structures and memory management systems. He co-founded the International Conference on Embedded Software (EMSOFT) and served as ACM SIGBED chair from 2011 until 2013 and ACM TODAES associate editor from 2011 until 2014.