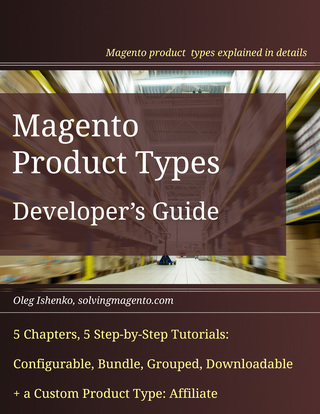 Oleg Ishenko
Want to better understand Magento? This book gives you a deep insight into one of the most important parts of Magento: product types. It focuses tightly on what you need to know to get started with complex Magento customizations that require detailed knowledge of product type functionality. You will learn how Bundle, Configurable, Grouped, and Downloadable product types work by following hands-on tutorials. At the end of this book, you will find out how to build a custom product type not available in Magento.
$9.99
Minimum price
$15.99
Suggested price

Magento is an open-source PHP e-commerce framework that incorporates a wide range of features that can satisfy nearly every imaginable e-commerce scenario. Thousands of online shops, big and small, use Magento.

Magento is a complex system and is known for its steep learning curve. The goal of this book is to provide information on one of the Magento core components: product types.

This book provides a detailed explanation of the four complex Magento product types: Configurable, Bundle, Grouped, and Downloadable. Each chapter is complemented by a step-by-step tutorial to give a practical insight into the discussed product type. The last tutorial explains how to create a custom product type: Affiliate.

Who this book is for

This book is not an introduction to Magento. For best results, those reading it should have a working knowledge of the system – knowledge that might contain some gaps, which this book aims to fill.

Oleg Ishenko has been working in the IT industry since the late 90s as a software developer, and later in the roles of a Lead of Development and CTO. He graduated from Humboldt University Berlin as MSc in Wirtschaftsinformatik (IT in Business) in 2009 and since then has been working< primarily in e-commerce.

For the last four years Magento has been his primary interest, and he has been spending countless hours hacking the code of this remarkable framework.

He lives in Berlin, Germany. In 2014 he co-founded Medizintechnikmarkt.de, a startup, where he currently works as CTO.