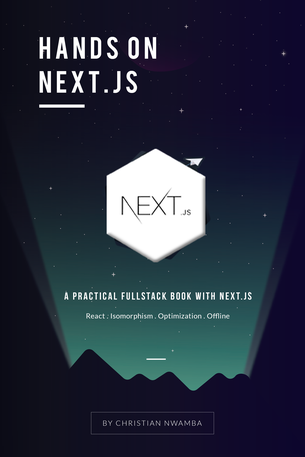 A Practical Fullstack Book on Universal (Server) Rendering for React

This book is 92% complete

"We migrated our whole frontend stack to Next.js and we significantly boosted site performance and development ease."

These are the words from a company, Scale API, who have shared success stories on Next.js. Next.js lends you the power to build SSR and fast apps. This book is a hands-on guide on how to do so.

Server side rendering still seems like mystery to a lot of us. The journey doesn't end at having a chunk of markup rendered to the server, rather, you have to consider other factors including syncing data and routing. Next.js is a great React-based tool that allows you to focus on writing your React logic while it does the SSR heavy lifting for you. Yes, just write React and your page contents are automatically server-rendered while following all the recommended patterns and practices.

This book is first of its kind and covers everything you need to know on building Next.js while teaching a lot of modern practices for building web apps. Some of the topics you will enjoy learning include:

The goal is to take you through a journey, which when completed, you should be able to build future-proof web apps that are optimized for the next billion users.

What I was told about Next.js

If this doesn't sound convincing enough, maybe you could consider what other engineers are saying about Next.js...

"We migrated our whole frontend stack to next.js and we significantly boosted site performance and development ease! We migrated away from global CSS, moving our styles to the components, and extended <Link> for supporting the prefetching of page data alongside with structure (which we blogged about here)."

"Ticketmaster decided to move to a single page application and chose React as a framework. However SEO is critical to our business and that made server side rendering absolutely necessary. Next.js has allowed us to move quickly, while catering to this requirement and offering us great performance out of the box."

"We love React. And love simplicity of Nextjs how quickly a developer can pick it and start using it. We use it with Apollo Graphql client. And on backend we use Keystonejs with graphql api. Keystonejs generates admin ui automatically for us. We love our stack."

What I was told about Hands on Next.js

"There are many great developers out there. But there are few great developers that understand how to convey concepts simply. Christian is one of those amazing developers that can break down complicated concepts to their core and be able to teach. In Hands on Next.js will take you into real-world static React applications in an enjoyable and focused way."

"Creating resilient, fast and offline web applications for the next billion users require the true grit of a developer armed with a plethora of tools. Christian Nwamba’s illuminating book reveals the perspicacity of his JavaScript knowledge in showing developers how to craft truly fast server-rendered React apps with the inimitable Next.js framework. A must read for every React developer!"

Chris is a Lagos, Nigeria based JavaScript consultant and community builder. He is currently the author program manager at Scotch.io and also consults with Cloudinary and Pusher on matters concerning developer evangelism and technical content creation. He's all about creating learning platforms for developers through collective community efforts and currently a co-organizer of Africa's leading developer community, forLoop Africa.