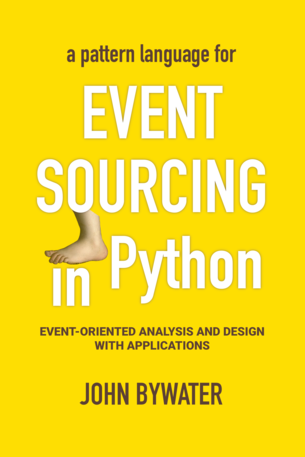 Event-oriented analysis and design with applications

This book is 96% complete

A pattern language for event sourced applications and reliable distributed systems. Examples are written in the Python programming language. Now includes event-oriented introductions to the pattern language scheme of Christopher Alexander, the process philosophy of Alfred North Whitehead, and the person-centred psychology of Rogers and Rosenberg.

This book can be used as a general guide for event sourcing, event-driven systems, and the tactical patterns of Domain-Driven Design. It is an accompaniment to the popular Python eventsourcing library, and gives an overview of the design of this library. The chapter examples present a distilled and enhanced version of the code available in the Python eventsourcing library.

The book's prologue shows how Christopher Alexander's pattern language scheme was originally intended as a scheme for describing events, and is best understood as an application of the event-oriented modern process philosophy of Alfred North Whitehead. A discussion of the way pattern language was taken up in software development reveals how the event-oriented nature of Alexander's scheme was overlooked. The prevailing general understanding of things that has predominated objected-oriented analysis and design is identified as the two-hierarchies scheme, which involves the substance-quality categories that Whitehead had already shown to be inadequate. The deficiency of the two-hierarchies scheme is explained, and the detrimental consequences for software design patterns, object-oriented programming, software architecture, and the agile approach to software development are highlighted. A return to the event-oriented approach that is exhibited in Whitehead's and Alexander's schemes is proposed under the name of event-oriented analysis and design. A detailed summary of Whitehead's scheme is provided as a second introductory chapter at the start of the book.

The book's epilogue gives an overview of both the event-oriented moment-by-moment, person-centred, psychology of Carl Rogers and its application as the collaborative or nonviolent communication scheme of Marshall Rosenberg.

This book is suitable for anybody interested in the history and philosophy of technology. It will also be interesting and useful for students and teachers of computer science and software engineering.

Lives and works in London. Developer of the Python eventsourcing library.