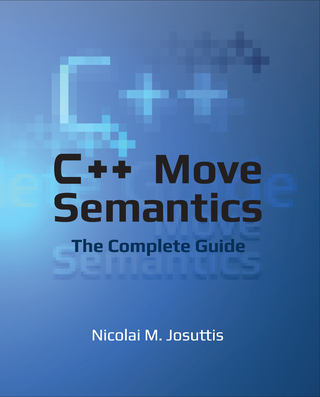 The book is complete now and done.

Bundle with C++17 - The Complete Guide

Move semantics, introduced with C++11, has become a hallmark of modern C++ programming. However, it also complicates the language in many ways. After several years of support of move semantics experienced programmers struggle with all the details of move semantics. Even for trivial classes, style guides give conflicting or inappropriate advice on how to benefit from move semantics. Time to explain all aspects of C++ move semantics in detail.

As usual for books by Nicolai Josuttis, the focus lies on the application of the described features in practice. Compelling examples and useful background information help to understand and improve code, from trivial classes up to generic foundation libraries and frameworks.

"This is the book I’ve needed for a long time." Rob Bernstein

"I thought I understood move semantics but I didn't really! I learnt a lot in your book." Jonathan Boccara

Note that this book is published step-by-step. It started with 110 pages first published in January 2020. Since then, the content grows with new chapters, examples, and caveats about the features of move semantics and I integrate all feedback I get for the pages already published.

Currently, the book is feature complete (all language features are described).

Only the use of move semantics in the C++ standard library and the final proof reading (yes, I am not a native English writer) is missing.

See www.cppmove.com for a detailed list of covered topics.

As written, once you bought it you will get all updates for free.

There is not errata yet, but I welcome all feedback to improve the current version.

PDF versus Other Formats

I write the book in LaTeX and generate PDF from it (the way I wrote my other books). The other formats (epub, mobi, and online reading) come from the leanpub markdown interface, for which I generate the necessary input from LaTeX by script.

Thus, the PDF layout has a better quality than the other formats. For example, the syntax highlighting rules for the formats other than PDF have to get fixed as soon as possible and the index is missing yet. Leanpub and me are working on corresponding improvements.

I hope you enjoy and benefit.

Nicolai Josuttis (http://www.josuttis.com) is well known in the programming community because he not only speaks and writes with authority, being the (co-)author of the world-wide best sellers

but is also an innovative presenter, having talked at various conferences and events.

He is an independent trainer and speaker being active in C++ standardization for more than 20 years.

An Interview with Nicolai M. Josuttis