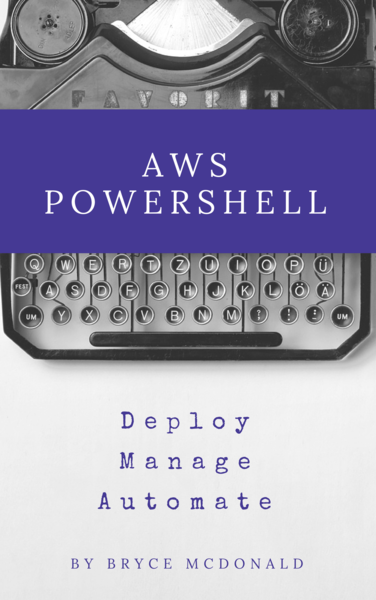 This book is 25% complete

Technology is always changing. I'm talking about the really revolutionary technology like AWS, PowerShell, even some of the helper functions and services that are utilized within. In this book, we'll cover these toolsets and more as we explore AWS management best practices and automations for any environment.

On LeanPub, you are getting the "Forever Edition" of this book. As I write it, if you find anything you don't like or if you find yourself wanting to know more than what I'm laying out there, let me know! Tweet at me, email me, start yelling somewhere around downtown Kansas City... I'll respond! The better we can make this book together, the better I can help you learn everything you need to know about AWS PowerShell.

I wanted to take a moment to touch on the publication process with LeanPub because it allows me to keep the book agile and fresh, and it helps me put the book in your hands much sooner than if I had to draft it all from scratch, go through a traditional publisher, and then finally deliver it to you. Also, if I did that, how would I know that what I'm delivering is even relevant to you?

Technology is always changing. We're talking about the really revolutionary technology in this book like AWS, PowerShell, and we'll even discuss some of the helper functions and services to build a functional AWS environment. ALL of it is changing, and ALL of it is updated daily. By purchasing this book, you'll have access (forever) to my endless updates to the AWS and PowerShell toolsets we'll use throughout.

Want to learn more? Check out another book that I've co-authored: PowerShell Tips

I've always had a skillset described as "unique". I wasn't quite a system administrator, because I knew too much code. I also wasn't a developer, because I didn't know any "real coding languages" (according to the developers). I've always been stuck in the middle, without a home. That is, until now.

The DevOps world is a natural fit for me, and now that AWS has a plethora of services that require this kind of "in the middle" administration that I've built my career on top of. Combining PowerShell with AWS administration has been a passion of mine, as the world leaves the era of "left click engineers" and requires administrators to start treating infrastructure as code.

You may also be interested in my credentials. At this point I've racked up a bakers dozen years of experience in the IT field, ranging from end user support at a University, to Information Security at a Washington D.C. startup, to DevOps engineering for major software developers, and independent consulting and techincal writing the whole time in between. I've carried certifications, I've let them expire, and I keep moving on. By the time you read this, I'll likely have a whole new set of credentials. This is the life of the "in the middle" engineer.