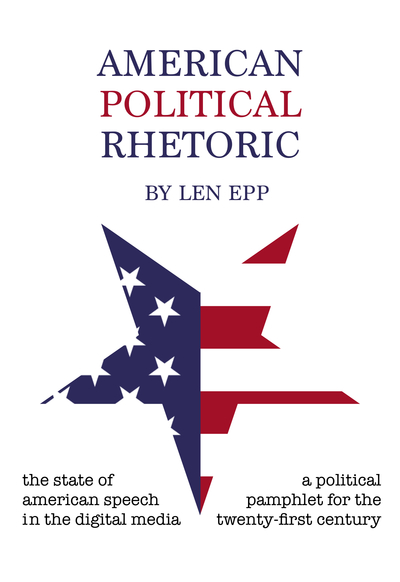 The State of American Speech in the Digital Media

The purpose of this pamphlet is to address the current state of American political rhetoric in the digital media and to provide a common language for discussing its uses and abuses.

An important part of this project is to give names to some of the most powerful rhetorical devices that are commonly deployed to manipulate political discussion. Once these devices are given names, they can be 'called out' or properly exposed in the same context in which they are used.

The following is an example of how each rhetorical device is analyzed.

To dishonestly present yourself as the disappointed ally of your declared enemy.

The claim that Obama has failed to cooperate with Republicans.

The prima facie lack of cooperation between the two parties in Washington is presented by Republicans, and even some Democrats, as though it is a negative outcome for which Obama is responsible, when it is, in fact, a direct result of their own strategic refusal to cooperate with the President. As a rhetorical device, 'pulling a Boehner' like this works primarily because we second-guess ourselves when we confront such extreme hypocrisy. We simply refuse to accept the fact that the Republicans, an American political party comprised of many people who genuinely believe themselves to be patriots, are deliberately undermining the federal government of the United States. We would rather spread the blame around than believe that a person could be so dishonest as to pretend that a state of affairs he both wanted and caused, is a bad thing caused by someone else. In other words, people get away with pulling Boehners because they are exploiting the strength of our good nature. In this example, just consider the fact that Mitch McConnell (R-Kentucky) actually told us that undermining the President was what he and his party were up to; and yet we still entertain the idea that Obama is to blame for the lack of cooperation in Congress.

One reason this tactic works, is that it refers to a fact: in this example, the self-evident lack of cooperation between the President and the Republicans.

One way or another, the person 'pulling a Boehner' can always fall back on the root fact in their own defense. In this case, they would begin to act as though they were just saying that the lack of cooperation is real, and that surely we can all agree it's bad, and can't we all just get along… and then they would probably trail off, so you could fill the empty space with your own qualified but obliging agreement.

If I may digress for a moment, it is noteworthy that those who pull this particular Boehner are also conflating getting your way with cooperation; that is, the only proof of Obama's cooperation that his detractors would accept - is his complete capitulation.

This is a particularly powerful move because it is often a genuine mistake, rather than a deliberate tactic. In other words, people genuinely don't see that their concept of cooperation is identical with getting precisely what they want. It is therefore advisable to beware anyone who makes generic claims about the positivity of 'working together'. They are trying to characterize any and all actual disagreement with them on policy as something else: a stubborn refusal to get along. Why can't we all just work together? Maybe it's because we actually disagree about the kind of work we should be doing. When you hear someone making generic calls for 'working together', ask them why they don't just change their minds and 'work together' with their own enemy, to advance their enemy's agenda. No doubt they will be full of explanations for what they really meant, but in the ensuing conversation, stick to the point: when they spoke about 'everyone working together' they really meant 'everyone doing what I want', or, to get to the psychological heart of their mistake, 'everyone following my commands'.

For example, when someone says that Obama has failed to cooperate with Congress, or Republicans, say that they are 'pulling a Boehner'. When they ask what that means, and you then define it, it is up to them to eplain why Republican refusal to cooperate with Obama is the President's failure.

Simply declare that the person pulling a Boehner is complaining about something he caused.

"That's like saying the humans in Battelstar Galactica 'failed to cooperate' with the cylons."

Here is a list of some other rhetorical devices I will analyze in the pamphlet:

Liberty in North Korea (LiNK's) Mission: Redefining North Korea by focusing on the people, while rescuing and providing resettlement support to North Korean refugees and pursuing an end to the North Korea crisis.

Liberty in North Korea (LiNK) is the only full-time grassroots organization in North America devoted to the North Korean human rights and humanitarian crises. LiNK provides protection and aid to North Korean refugees hiding in China and, utilizing a modern-day underground railroad through Southeast Asia, rescues refugees and helps them to reach freedom. LiNK’s global grassroots movement works to redefine public perception on North Korea, shifting attention away from the politics and onto the people, and provides a way for concerned citizens to come alongside the North Korean people and help bring about positive change. LiNK also works to develop people-focused strategies that will have the potential to promote change inside North Korea in the long term.