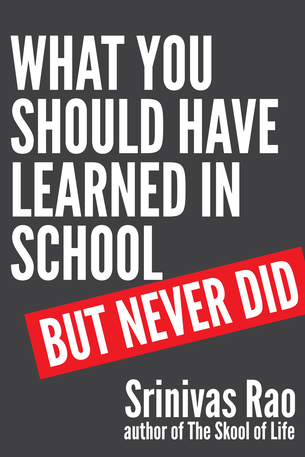 The Skool Of Life

The Skool Of Life

What You Should Have Learned in School But Never Did

Many of us go through life scratching our heads, wondering why we can't seem to figure it all out. We to go to school, we get good grades, we get degrees, and somehow none of this leads to the life we want. I'm a byproduct of this kind of an education and it's only after school that I've discovered that there many things we never learned in school. But those things are essential to success in life. This book is simply about the things you should have learned in school but never did.

My name is Srinivas Rao. In April 2009, I graduated from the MBA program at Pepperdine University. I always joked that I all I got for my education was pieces of paper that hang on the wall at my parents house, and a bill that shows up every month. So, I decided it was time for a different kind of education and started a blog called The Skool of Life where I write about the things you should have learned in school but never did. Eventually it took on a life of its own.

In February of 2010, as the result of a weekly interiew series that I ran on the Skool of Life, I became the host-co founder of a podcast called BlogcastFM on which I've conducted over 200 interviews with bloggers, authors, entrpreneurs and social media experts. Today the show gets almost 60,000 downloads a month, is 5-star rated in iTunes, and is sponsored by Livefyre. I know more about blogging than I ever cared to know about becase of this.

If you start a conversation with me, I should warn you that it won't be long before I want to talk about surfing (the ocean, not the internet). I have to clarify given the audience I'm dealing with. I'm obsessed with surfing and in 2011 I sold everything I owned and moved to Costa Rica for 6 months just so I could chase waves.

I'm working on a few different projects that will eventually appear here on Lean Pub. The first of those projects is a book based on The Skool of Life. Another one is Stoked for Life: Life Lessons from Surf Sessions.

I LOVE meeting new people and hearing what they're up to, so feel free to reach out to me anytime.